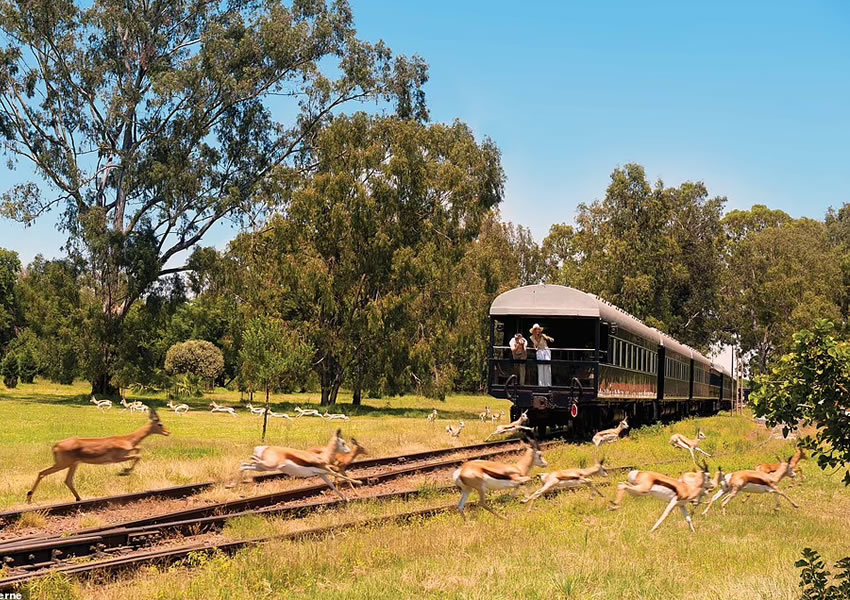 Agatha Christie once said: ‘Trains are wonderful… to travel by train is to see nature and human beings, towns and churches, and rivers, in fact, to see life.’ She was right. Here we round up some of the world’s most spectacular rides. 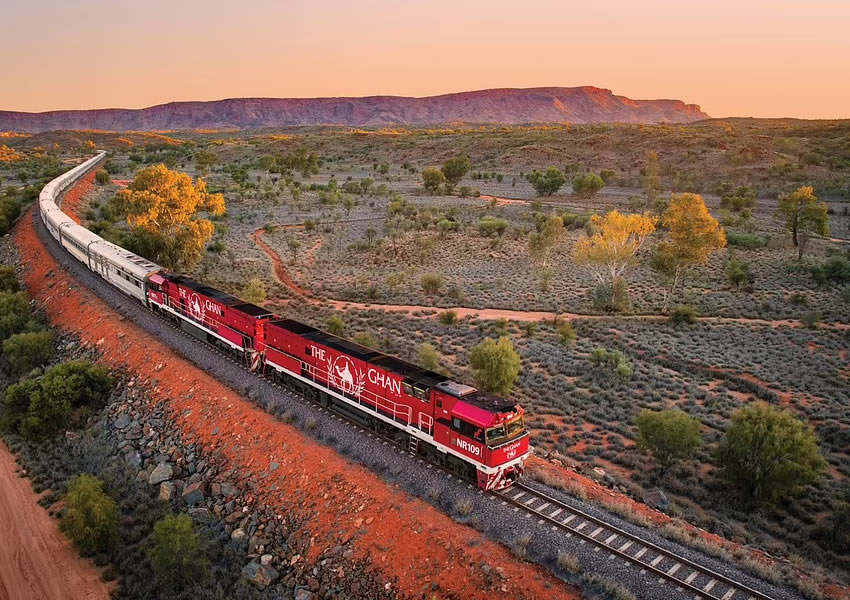 The shiny, stainless-steel carriages of The Ghan – pictured – sweep across the immense dusty red-soil plains of Australia

The 54-hour, 1,851-mile journey between Darwin and Adelaide — or vice versa — on The Ghan, is superb. Shiny, stainless-steel carriages sweep across immense dusty red-soil plains, stopping in Alice Springs, which is a springboard to see the famous sandstone monolith of Uluru. The Ghan is a shortening of The Afghan Express, the name given to Afghan camel herdsmen who crossed the Outback in the 1800s. 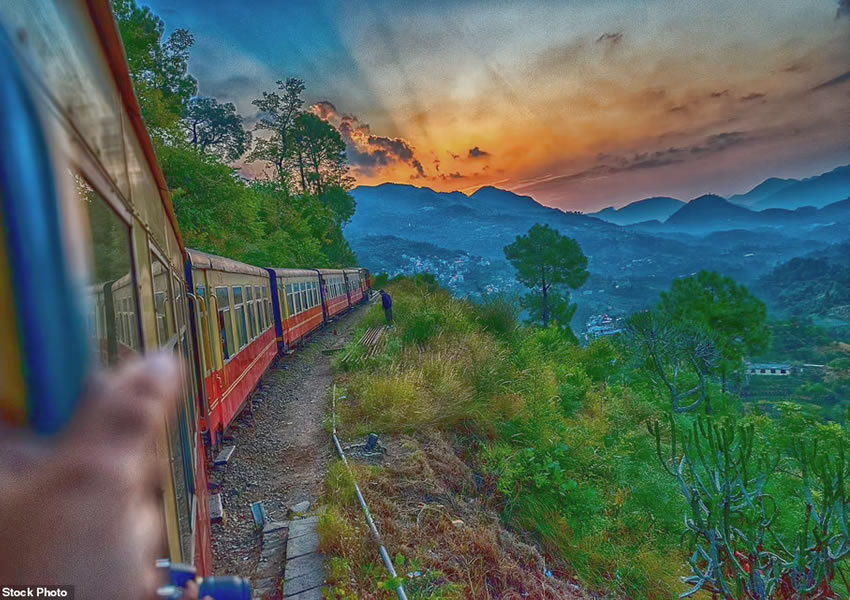 India’s Shimla service from Kalka is nicknamed the ‘toy train’, with a twisty 60-mile route through 107 tunnels


There are more than 68,000 miles of rail tracks in India, making it a wonderful country to explore by train. Some of the finest rides are along narrow-gauge lines into the former hill stations of British colonial rule at Darjeeling and Shimla, both in the foothills of the Himalayas. The Shimla service from Kalka is nicknamed the ‘toy train’, with a twisty 60-mile route through 107 tunnels. 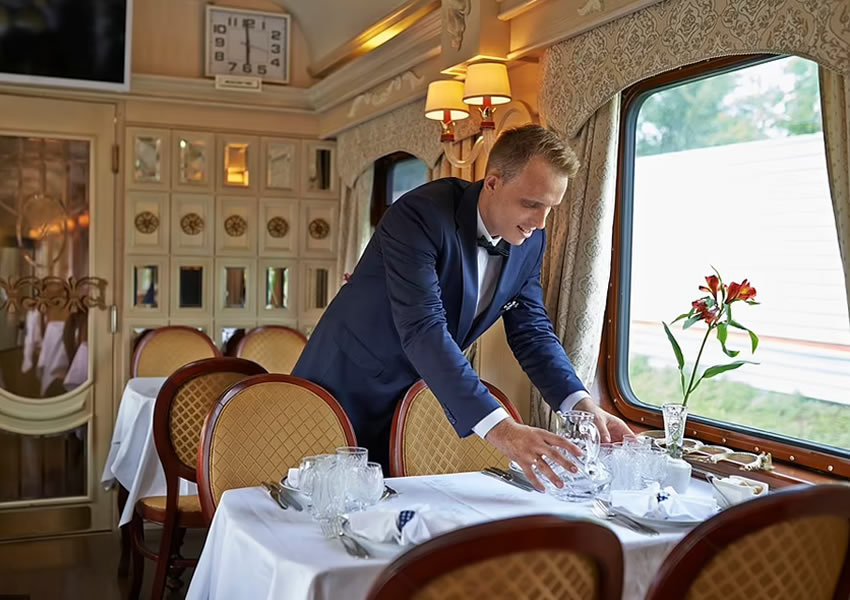 Preparing to dine in luxury on the Trans-Siberian Express. Traveling on the railway gives you an idea of the sheer enormity of Russia

Crossing from Moscow to Vladivostok on the Trans-Siberian Railway, you get an idea of the sheer enormity of Russia — the ride covers 5,752 miles. The service also runs from Moscow to Beijing, either through Mongolia (4,735 miles) or Manchuria (5,623 miles). In Siberia, vast pine forests spread out, interrupted by cities with great smokestacks and villages with simple abodes.

ON A SWISS ROLL 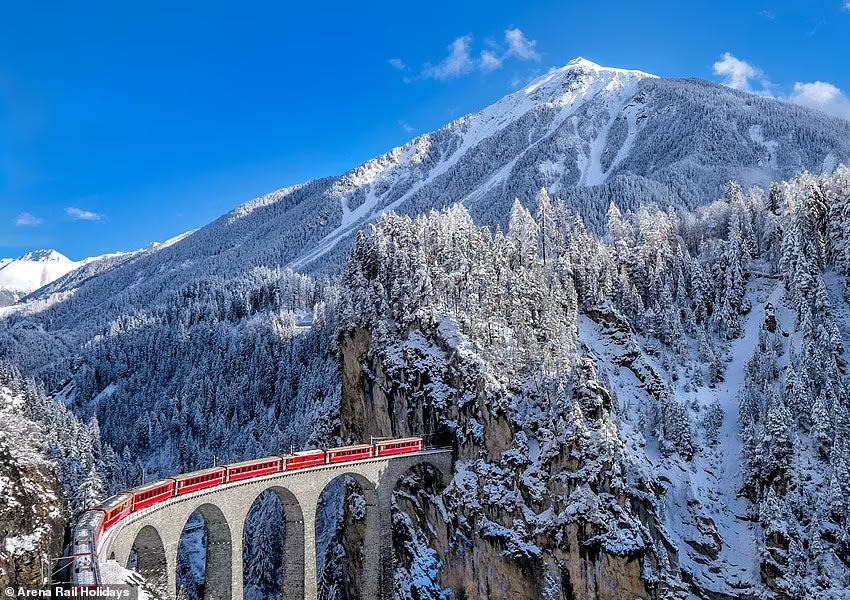 Join the Glacier Express in winter to see the snow-capped mountains of the Swiss Alps rising all around. The route covers 181 miles from Zermatt to St Moritz. Carriages have panoramic windows so you can see all the peaks. 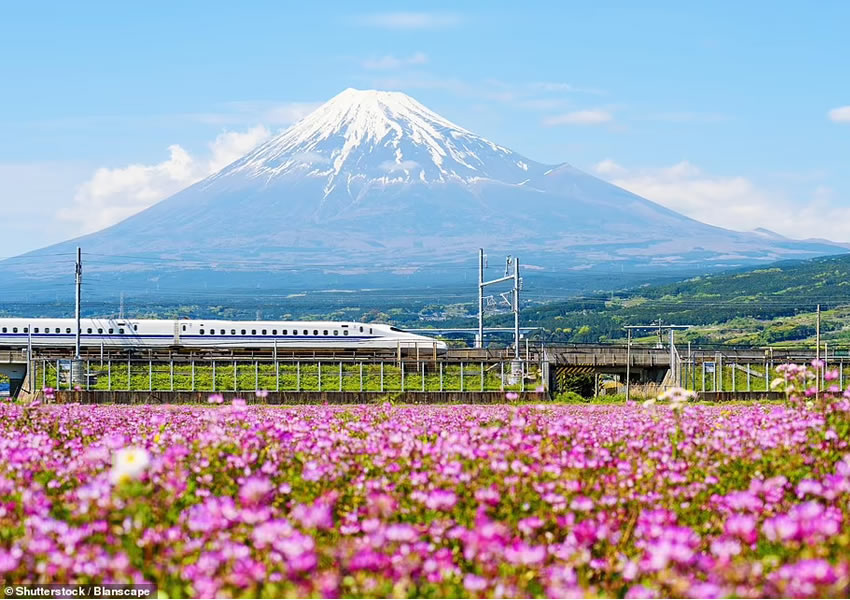 Zip along coastlines and between mountains on Japan’s Shinkansen trains. Above, the bullet train passes Mount Fuji

Japan’s Shinkansen (bullet) trains reach 186mph and are famous for their punctuality. Zip along coastlines and between mountains. Many tours begin in Sapporo in the north and finish in Hakata in the south. 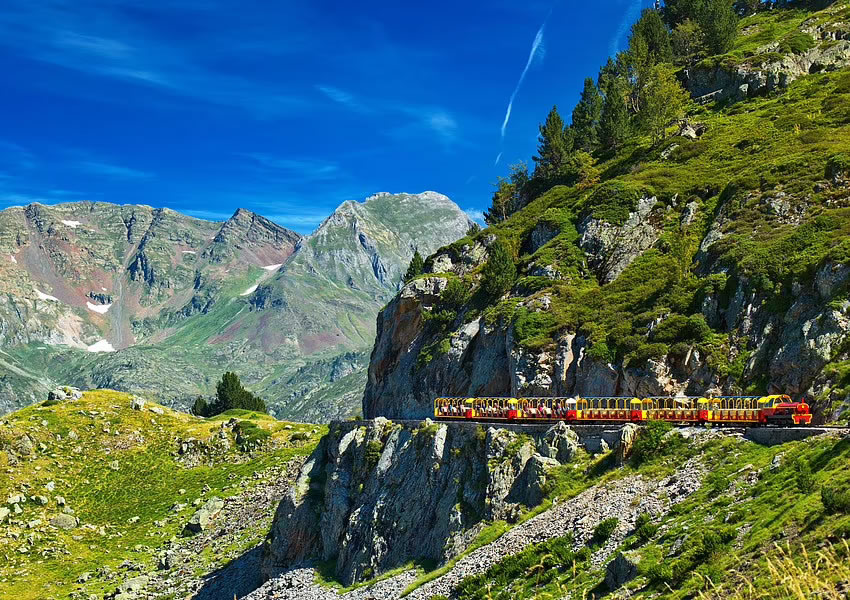 Slide along the narrow-gauge tracks of the French Pyrenees aboard the Little Yellow Train, rising from an altitude of 427 meters in Villefranche de Conflent to Bolquere-Eyne, France’s highest railway station at 1,592 meters.

The 39-mile route passes through 22 stations. In good weather, passengers can sit in open-sided carriages. Join the Little Red Train for a 38-mile journey between Rivesaltes and Axat, drinking in views of vineyards and chateaux. 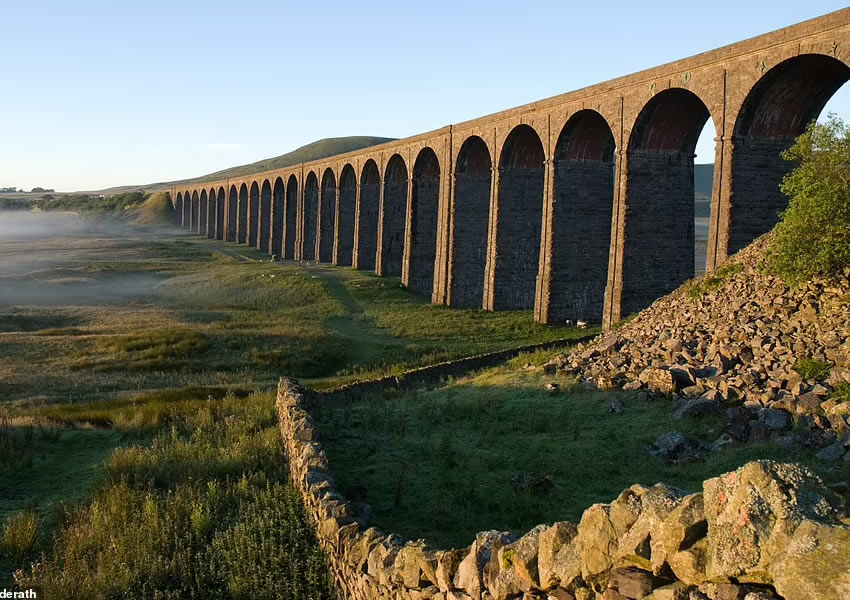 Sip champagne on the Northern Belle as it passes through the Pennines and Yorkshire Dales, with the impress Ribblehead Viaduct, pictured, one of the highlights

Enjoy a ride on the Northern Belle train along the 73-mile Settle-Carlisle line. The route takes you through the Pennines and Yorkshire Dales, with highlights including the impressive Ribblehead Viaduct. Expect a Pullman dining car, champagne, and fine dining. 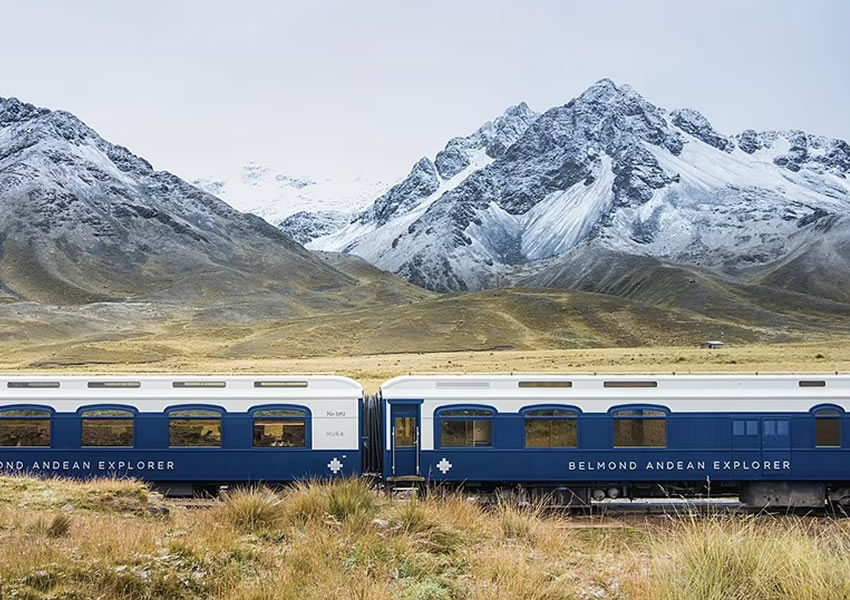 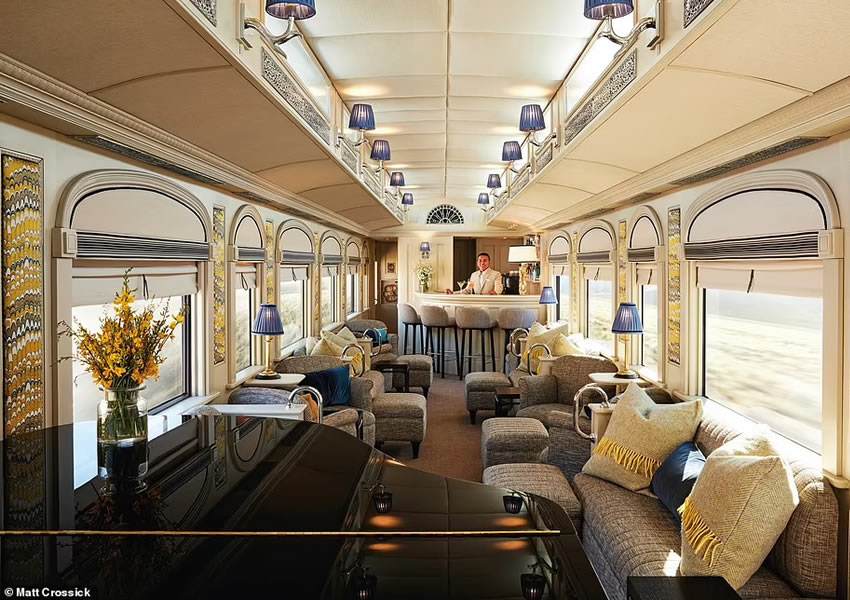 Inside the five-star Belmond Andean Explorer, which is a grand sleeper train

Travel between the ancient Inca capital of Cusco and Lake Titicaca, the world’s highest navigable lake, before continuing to the whitewashed city of Arequipa, on the five-star Belmond Andean Explorer, a sleeper train.

This three-day journey takes in magnificent mountain scenery, including the El Misti volcano rising near Arequipa. From Cusco, a day trip on the Hiram Bingham train takes you to the Inca ruins at Machu Picchu.

Enjoy an odyssey across Africa’s great plains on the ‘Coast to Coast – African Kingdoms’ tour, pictured, with the possibility to stop for safaris

How about a coast-to-coast ride across Africa? Join a ‘Rovos Rail — Pride of Africa’ luxury train on the Katanga-Benguela route across Angola into the Democratic Republic of the Congo.

The route links up with tracks into Zambia and Tanzania on a 2,650-mile odyssey across great plains, through remote valleys, and along mighty rivers, with the possibility to stop for safaris. You’ll ride in comfortable 1950s vintage carriages, plus there’s a swanky restaurant car.

Take to the tracks between Denver in Colorado and Moab in Utah on a new, two-day Rocky Mountaineer service. Following the swirling waters of the Colorado River, the train snakes into canyons and crosses a desert-like landscape. Some carriages have panoramic glass roofs. It goes slowly so you’ll be sure to get lots of super snaps.