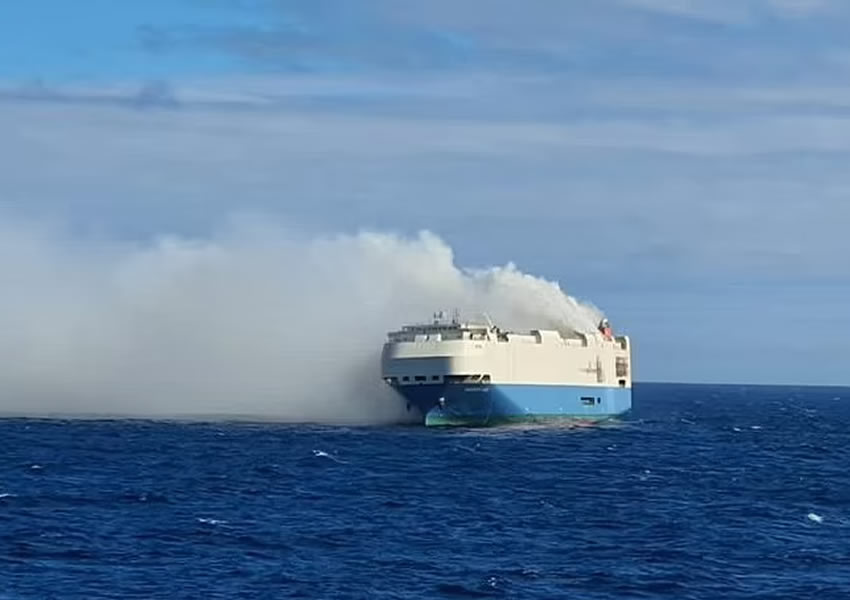 Race to salvage fire-ravaged US-bound cargo ship drifting in the Atlantic with thousands of supercars on board including Porsches, Bentleys, and Lamborghinis with blaze fueled by batteries in electric vehicles

Rescuers are racing to salvage a US-bound cargo ship in the Atlantic engulfed in flames with 4,000 cars on board including Bentleys, Audis, and Lamborghinis.

The operation is taking place off the Azores archipelago where the ‘Felicity Ace’ cargo ship caught ablaze at sea on Wednesday.

Lithium-ion batteries in the electric cars on board have caught fire and the blaze requires specialist equipment to extinguish. Investigators are probing whether the batteries started the onboard inferno.

The ship is still ablaze and plumes of white smoke are billowing from the vessel as a Portuguese navy ship works to stop it from sinking with the 3,965 Volkswagen AG vehicles on board, including 1,100 Porches and 189 Bentleys.

One man said his custom-ordered Porsche Boxster Spyder, whose base models sell for at least $100,000 was on board the ship.

Captain Joao Mendes Cabecas of the port of Hortas said: ‘The ship is burning from one end to the other… everything is on fire about five meters above the water line.’


What is on board the cargo ship?

The Felicity Ace is believed to be carrying 3,965 vehicles on board on its route from Germany to the US.

Volkswagen has not confirmed the number of cars on board, but Porsche said around 1,100 models are on the ship. Porsches range in price from around £45,000 to £200,000 for their standard models. Bentley said 189 of its cars were also on board. A new Bentley Continental GT V8 would set a driver back £157,000.

There were reportedly 21 Lamborghinis on the doomed vessel last month, but the current number is unknown. A limited-edition Lamborghini can cost as much as £2.5million, while a standard SUV from the Italian supercar maker costs around £150,000.

Rescuers believe the 650ft longship may be too large to be towed to a port in the Azores, which is more than 900 miles from the European mainland. Towing boats were en route from Gibraltar and the Netherlands, with three due to arrive by Wednesday.

A sixteen-person salvage team from Smit Salvage, owned by Dutch marine engineer Boskalis, was sent to the ship to help control the flames. The Portuguese Air Force has rescued 22 crew members from the burning ship after they abandoned the vessel and were taken on board the Resilient Warrior tanker after it diverted its route to assist with the rescue. 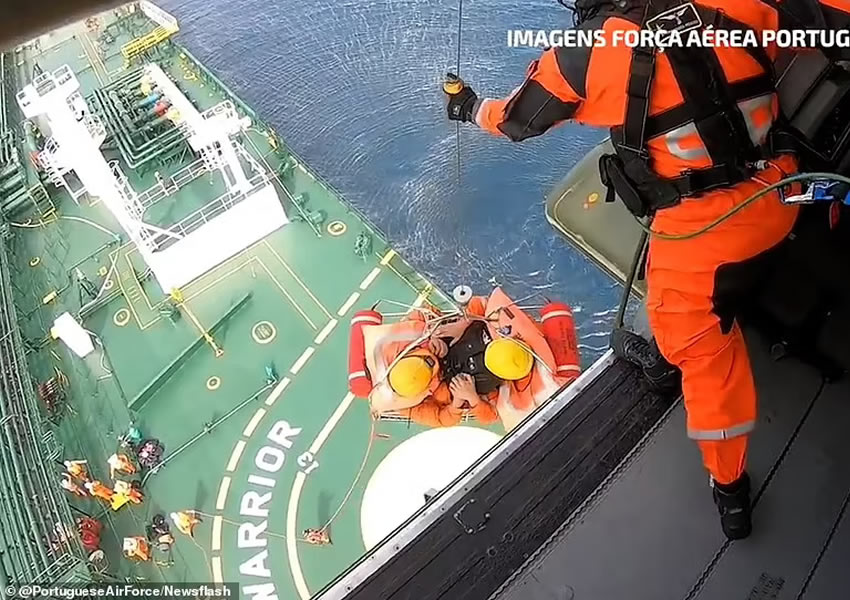 They were then airlifted to safety in a military helicopter and taken to Faial Island.

The Felicity Ace sounded the alarm after a fire broke out in the hold, the Portuguese Navy said in a statement. The cause of the fire is not known. The ship was sailing from Emden in Germany and had left on February 10 and was heading to the Port of Davisville in the U.S. state of Rhode Island, according to online vessel trackers.

The ship was originally expected to arrive at Davisville on February 23.

Portugal’s navy said one of its patrol boats and four merchant vessels were helping with the rescue. The Portuguese Air Force aircraft were also mobilized. After transmitting the distress signal, a Portuguese Navy patrol boat together with four other merchant ships in the area headed toward where the distressed ship was located. The crew abandoned the ship and got into lifeboats.

Eager Porsche buyers logging into the Track Your Dream service, which details the progress of the car’s delivery, stated how the company was ‘aware of an incident on the Felicity Ace carrying certain Porsche vehicles.’

Matt Farah, the man behind The Smoking Tire YouTube channel, posted Wednesday regarding his own Porsche that was apparently on board the ship.

‘I ordered a Boxster Spyder in August, and I was very excited to get it at the end of this month, and now it seems like it might become an artificial reef,’ said Matt Farah who runs the Smoking Tire YouTube channel, which has more than 1 million subscribers.

‘I’m only saying this because I know no one was hurt, which is obviously more important.’

Bentley said 189 of its cars were also onboard the blazing ship. That could work out at around a total loss of £22million in Bentleys alone.

‘We are working with the shipping company to find out further information,’ said a spokesman.

Lamborghini has refused to comment on the number of its vehicles on board the doomed ship, but last month 21 supercars were being transported by the vessel.

The majority of the rest are likely to be Volkswagens or Audis.

On Wednesday, Porsche released a statement over the stricken ship.

‘Our immediate thoughts are of the 22 crew of the merchant ship Felicity Ace, all of whom we understand are safe and well as a result of their rescue by the Portuguese Navy following reports of a fire on board.

‘We believe a number of our cars are among the cargo onboard the ship. No further details of the specific cars affected are available at this time – we are in close contact with the shipping company and will share more information in due course.’

‘We are aware of an incident today involving a cargo ship transporting Volkswagen Group vehicles across the Atlantic. At this time, we are not aware of any injuries. We are working with local authorities and the shipping company to investigate the cause of the incident.’

A Portuguese Navy spokesperson said there were no more details about the ongoing operation.