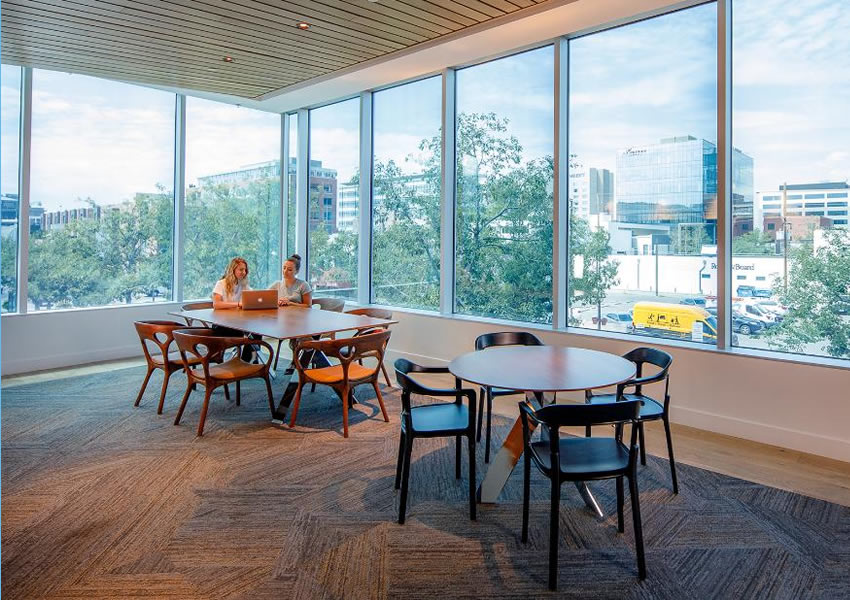 The Silicon Valley firm debuted as a publicly-traded company Tuesday through a merger with a SPAC backed by Cantor Fitzgerald. The deal, including private sales of shares, is raising $800 million that View plans to use to pay off a pile of debt and build a product to dominate what it sees as a $1 trillion market.

“We took a day-to-day object and fundamentally transformed it for the 21st century to make it more sustainable, better for health and wellness, and get better outcomes for businesses,” Rao Mulpuri, View’s chairman and CEO, told CNN Business.

The view says it controls 80% of the market for next-generation smart windows. Its products are used in more than 750 buildings globally, including Dallas Fort Worth International Airport and Kaiser health facilities. Major companies including Netflix (NFLX), Facebook (FB) and FedEx (FDX) also use View glass in their offices, the company said, and Google plans to install it at its new Manhattan headquarters.

Conserving energy to cut costs and save the planet

View’s predictive systems take into account a wide array of factors including local weather, the arc of the sun and how far workers are situated from windows to create different levels of tint, the company said.

“Windows are your only connection to the outside. How sad to hang blinds on them,” Mulpuri said. “You bought the view, you paid for it with your rent. But the truth is, if the shades are down, then you have the allure of the view — without the actual view.”

View, which is 12 years old and has more than 500 employees, is debuting on the Nasdaq at a time when investors are looking for ways to bet on solutions to the climate crisis. Major banks are promising to align their lending activities with the Paris climate agreement and solar and wind companies are booming.

The view says its products reduce energy consumption and greenhouse gas emissions by blocking more than 90% of solar radiation from entering buildings.

“To get to net zero, you can load up the roof with renewables [like solar panels], but the majority still has to come from conserving energy in buildings,” Mulpuri said. “You need to do that without penalizing the quality of life of people. You can’t just say, ‘Suck it up. Turn up the thermostat.’ We can deliver on the path to net-zero while making it more comfortable and better for your health.”

Cantor Fitzgerald believes in smart windows enough to bring View public in a merger that was announced in November. At the time, Howard Lutnick, Cantor’s chairman and CEO, hailed View’s glass as a “gamechanger that will revolutionize the real estate experience,” saying it will eventually mean “buildings will no longer need blinds and shades.”

Debt has more than quadrupled since late 2018

But View faces real obstacles ahead. First, the company needs to figure out how to scale its product by rapidly building out manufacturing capabilities. And that process will require hefty investments — hence taking the company public.
“It’s about how fast we can build out our own capabilities,” Mulpuri said. “We’re just getting started and it’s a $1 trillion market.”

Mulpuri said the plan is to use the proceeds from the SPAC and PIPE (private investment in public equity) to add manufacturing capacity and invest in research and development.

View also plans to use the cash influx to repay its debt, which has more than quadrupled since the end of 2018 to $262 million, according to slides presented to investors.

And View also needs to find a path to profitability after losing an estimated $87 million last year. The company’s revenue is projected to spike 138% in 2021, but it still expects to lose $52 million this year.

SPACs aren’t for everyone

The view is the latest company to join the SPAC boom. Special purpose acquisition corporations, also known as blank-check companies, are shells that exist solely to bring private companies public. These alternatives to traditional IPOs were once reserved for the backwaters of Wall Street but major companies including DraftKings and Virgin Galactic have gone the SPAC route.

“In the past, people generally looked down on them. But over the last year SPACs and sponsors have become more mainstream,” Mulpuri said. “We chose this route because we have a demonstrable need for capital.”

PACs have raised vast amounts of money and recently celebrities including Alex Rodriguez, Ciara Wilson, Serena Williams and Shaquille O’Neal have gotten into the act.

Mulpuri warned that startups without proven products could hit turbulence — and hurt investors — if they go public via a SPAC before they’re ready.

“Some people will get burned in the process,” he said. “With anything that gets overhyped, these things have a chance to cause some trouble in the future.”