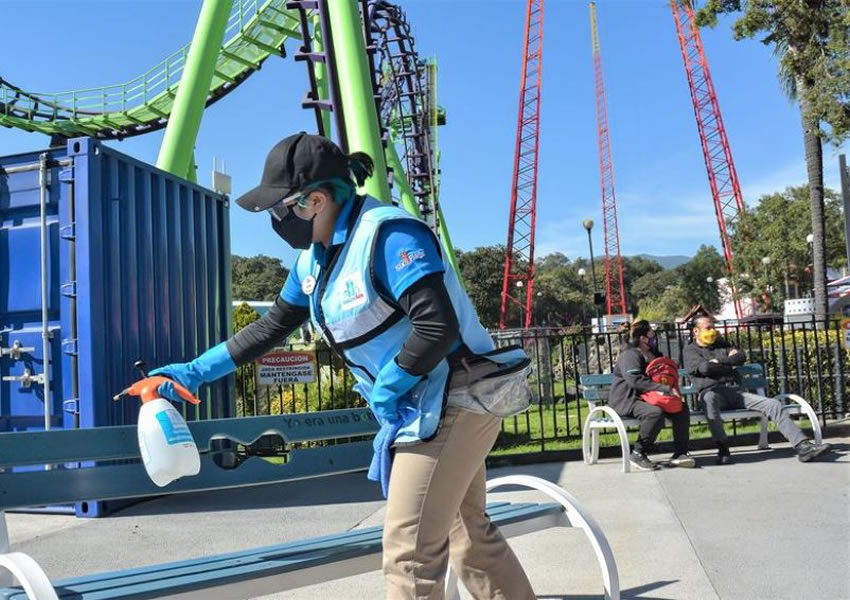 Mexico City goes to medium-risk yellow on the coronavirus stoplight system on Monday, bringing 12 weeks of high-risk orange light restrictions to an end.

For the first time since the federal government’s coronavirus stoplight system was introduced last June, Mexico City will switch to medium-risk yellow as case numbers and hospitalizations continue to fall.

City official Eduardo Clark announced Friday that the risk level will be lowered on Monday, bringing 12 consecutive weeks of high-risk orange light restrictions to an end.

Prior to February 15, when the capital switched to orange, red-light maximum-risk restrictions had been in place for eight weeks.

For the first time since the beginning of the pandemic, Mexico City has seen sustained improvements in the different indicators used to determine the stoplight color, said Clark, who is the director of the government’s Digital Agency for Public Innovation.

He said that 16.5% of hospital beds set aside for coronavirus patients are currently occupied, the lowest level in over a year. There are 1,404 Covid-19 patients in hospitals in Mexico City, 277 fewer than last Friday.

Estimated active coronavirus cases in the capital have also declined from more than 8,000 a week ago to 6,419.

However, even with the decline, Mexico City — the country’s coronavirus epicenter since the beginning of the pandemic — still has far more active cases than the other 31 states, according to Health Ministry estimates. The only other states with more than 1,000 estimated active cases are México state and Tabasco with 1,558 and 1,085, respectively.

Nevertheless, restrictions will be eased in Mexico City due to the downgrade in the official risk level. Stores and movie theaters will be permitted to increase their capacity to 40% of normal levels starting Monday, and restricted opening hours will no longer apply to banks.

Children’s parties at party halls with up to 50 guests will be allowed starting May 27 as long as the risk level in Mexico City doesn’t increase, and public expos will be permitted as of the same date with attendance capped at 30% of normal levels.

The shift to yellow will bring Mexico City in line with the majority of Mexico’s states. On the map currently in force, 20 states are yellow, six are orange and six are low-risk green. The federal Health Ministry will present an updated map at Friday night’s coronavirus press briefing.

The national coronavirus situation has also improved considerably in recent weeks: the number of new cases reported in April was 30% lower than March while Covid-19 deaths were down 22%.

Mexico’s accumulated case tally rose to almost 2.36 million on Thursday with 2,846 new cases reported. The official Covid-19 death toll increased by 166 to 218,173. However, a new analysis by the Institute for Health Metrics and Evaluation at the University of Washington School of Medicine puts Mexico’s real death toll at over 600,000.

Meanwhile, Mexico’s national Covid-19 vaccination program continues to make progress in inoculating the adult population, with the first doses given to people aged 50–59 this week. A total of about 20.5 million doses had been administered by Thursday night, including more than 1 million in Mexico City. Most of the doses have gone to people aged 60 and over and frontline health workers.

Mexico had received 26.6 million doses of five different vaccines, meaning that about three-quarters of those delivered had been used by late Thursday.