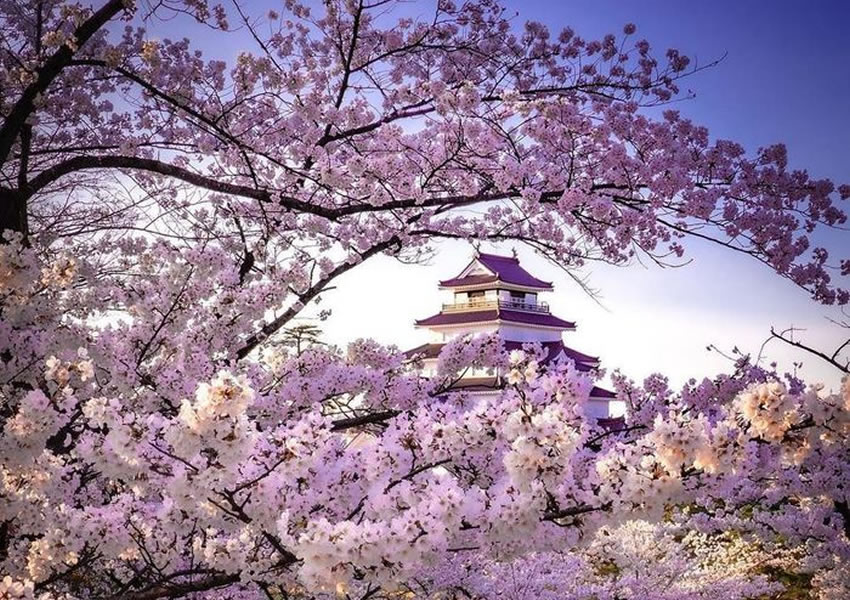 When the god of the mountains offered Ninigi, the grandson of the sun goddess, to marry one of his daughters, he decided that if he gave preference to the eldest, High Rock, the life of their descendants would be eternal and solid, like stones. But if he prefers the youngest, Blooming, then the life of their children, regardless of social status, will be beautiful, but short, like sakura blossom. Ninigi chose Blossom and became the ancestor of the Japanese emperors.

The Japanese, annually contemplating the beauty of this amazing plant and looking at the fragility of its flowering, reflect on the fact that beauty is not eternal, but life is fleeting and fragile. That is why it very much resembles a crumbling sakura flower – although it is beautiful, it leaves too soon: it is not for nothing that the blooming sakura symbolizes the frailty of life and the fickleness of being.

Description of the tree

Sakura is the name for trees of the pink family, the plum subfamily (the species is finely sawed cherry), most of which perform a purely decorative function: they bloom, but do not bear fruit (unlike other trees of its kind, Japanese sakura is grown not for the sake of berries, but for flowers). There are 16 types of sakura and more than 400 varieties.

Despite the fact that cherry trees can be found mainly in the south of the northern hemisphere: in China, Korea, in the Himalayas, most of the trees of this species grow in Japan: nine out of sixteen species and a considerable number of varieties. There are especially a lot of someyoshino (white sakura with huge flowers) and shidarezakura (weeping willow) – this sakura color has a pink tint.

Sakura grows very well next to other plants of its kind, which, depending on how they were planted, make a different impression. For example, tree branches planted in parallel rows at the top can intertwine with each other, forming a flowering arch above your head – it looks especially gorgeous if at this time the flowers have already begun to gradually fall off and a person steps on the carpet that created sakura petals.

The height of the plant depends on its age, but usually it is about 8 meters (but there are also taller trees, for example, one of the oldest cherry blossoms in the world, whose age is 1800 years, has about 24 meters in height).

The bark is smooth, cut across the entire surface of the tree with small horizontal cracks of a gray, green or red hue, and the wood of the tree is very flexible due to the high amount of resin in it.

Leaves are oval or spear-shaped with slightly jagged edges. When a sakura branch blooms, it is completely covered with flowers, mainly white or pink, with each inflorescence consisting of several double flowers, usually having 5 petals. The Japanese managed to breed species whose flowers contain about 50 petals, the diameter of which is about 50-60 mm – outwardly they even resemble roses, peonies, chrysanthemums.

Sakura petals can be of different colors: white sakura and pink are often found, but you can often see flowers of red, crimson, yellow and even green and variegated tones. Since the sakura flowers bloom even before the sakura leaves appear on the tree, it seems as if a huge number of delicate inflorescences are stuck to the dead and bare trunk (therefore, the flowering period in Japan is also associated with rebirth).

When the sakura petals start to fade, but have not fallen from the tree yet, and the cherry blossom sprig is overgrown with the first leaves, the plant looks extremely elegant and summer-like (the Japanese call it Ha-Dzakura, which means “sakura with leaves”).

Few trees of this species bear fruit, and if they do yield, the sakura (sakurambo) fruits are usually very small, cherry-colored, have a large stone, tightly covered with thin pulp, and taste very sour and tart. They are sold in small boxes and are extremely expensive.

Sakura bloom begins in January on about. Okinawa (located in the south) and ends at about. Hokkaido, thus moving north. The period when this tree blooms largely depends on its species: some plants begin to bloom in winter, others – at the end of spring. For example, such well-known species as:

When the flower is fully open, it stays that way for about a week. How long it will bloom depends largely on the weather and temperature – the colder it is, the longer it will be possible to contemplate the sakura flowers. But strong winds and rain, on the contrary, will significantly reduce sakura bloom.

The sakura blossom in Japan is celebrated at the state level: the official opening of Hanami (“Contemplation of Flowers”) takes place in the main Tokyo park Shinjuku – and not only famous politicians, but also members of the imperial family take part in it.

The sakura blossom in Japan is celebrated at the state level: the official opening of Hanami (“Contemplation of Flowers”) takes place in the main Tokyo park Shinjuku – and not only famous politicians, but also members of the imperial family take part in it.

During this period, numerous gardens, parks, squares and other places where the cherry tree blooms are visited by a huge number of people, viewing in the evening is especially popular, when the sakura branch is very beautifully highlighted. Contemplating, people arrange picnics, relax, and often use the Hanami holiday in their personal interests – they negotiate, strengthen contacts, make new acquaintances.

From the fruits of this plant, the Japanese make sour wine or add to rice during cooking. Leaves and petals are also used – they are salted, after which the leaves are used as an edible shell for the “sakura-mochi” sweets made from rice, and sakura petals do a good job with the role of an odorous seasoning. During the holidays, they are often dipped in boiling water or green tea, in contact with hot water, sakura petals open and delight guests with their appearance.

Experts consider sakura to be an ideal tree for bonsai – it grows slowly, therefore, having bought a young plant, you can not be afraid that in a year or two it will have to be transplanted outside, especially since the vertical growth of the tree will be restrained by constant pruning of new shoots and pruning of roots.

You can buy such a plant in special stores. Small flowering sakura looks the same as an older tree, only the diameter of its inflorescences does not exceed one centimeter (usually pink). When creating a bonsai, it is imperative to remember that the plant is, although small, but alive, and not a stone insensitive toy, and therefore, if you do not pay enough attention to it or apply the wrong approach, it can die.

Bonsai utensils should be shallow, and their diameter should be between 15 and 20 cm. Sakura bonsai prefers to grow on well-fertilized soil. It is advisable to apply organic fertilizers to the soil a month before planting the plant, nitrogen – simultaneously with planting, potassium and phosphorus, which promote the circulation of nutrients in the plant – in the summer. If the soil is poorly fertilized, the amount of humus should be from 8 to 12 g / dm3, and in moderately fertilized – about five.

Japanese sakura is very fond of good lighting, and therefore must be in a bright place (if it stands in the shade, there is a risk of powdery mildew). When looking for a place for a plant, it should be borne in mind that it very much does not like drafts.

Water the bonsai tree once a day (half a glass of water), less often in winter. A small plant is transplanted annually while cutting off 1/3 of the rhizomes (branches are also possible, but not to get carried away, since sakura does not like this). If caterpillars, woodlice, red ticks, bark beetles and aphids are found in the ground, you need to immediately destroy them with insecticides, otherwise, they will very quickly destroy the plant.