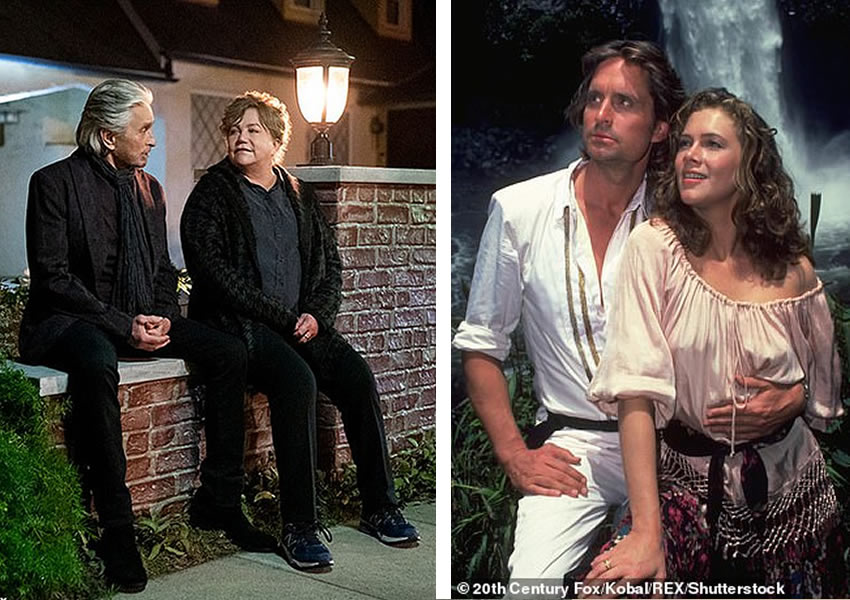 Michael Douglas, 76, reunites with his Romancing the Stone co-star Kathleen Turner, 66, after 32 years… for the final season of The Kominsky Method.

The dup have reunited for the third and final season of Netflix’s hit series The Kominsky Method. Douglas, 76, and Turner, 66, starred alongside each other in a string of hit movies in the 1980s. Previously, the pair co-starred in Romancing the Stone in 1984 and its 1985 sequel, The Jewel of the Nile. The last time the pair worked together was on the dark comedy War of the Roses, 32 years ago in 1989.

Michael Douglas reunited with his longtime costar Kathleen Turner for the third and final season of Netflix’s hit series The Kominsky Method. The 66-year-old actress, who previously made a guest appearance on the series as Douglas’ ex-wife last year, will be taking on a full-time role on the critically-acclaimed as the mother to his daughter Mindy (Sarah Baker).

In the first picture of Sandy Kominsky (Douglas) and Roz together, they can be seen sitting together and look in deep conversation.

Speaking about the decision to play his former spouse on the half-hour comedy-drama about getting older, Turner told People it was a ‘no-brainer.’

‘Michael and I have always been friends but it was fun just to fall back in the rhythm again of our working together,’ she told the outlet in November 2019.

Over the summer, new broke that the series would conclude after three seasons.

‘The Kominsky Method has been a true passion project for me, and it’s been an incredible experience to see the warm response from both audiences and critics,’ the show’s creator and executive producer Chuck Lorre in a statement to The Hollywood Reporter in July.

He continued: ‘I’m excited to wrap up the story with this final chapter.’

Season 3 will premiere on May 28 on Netflix.