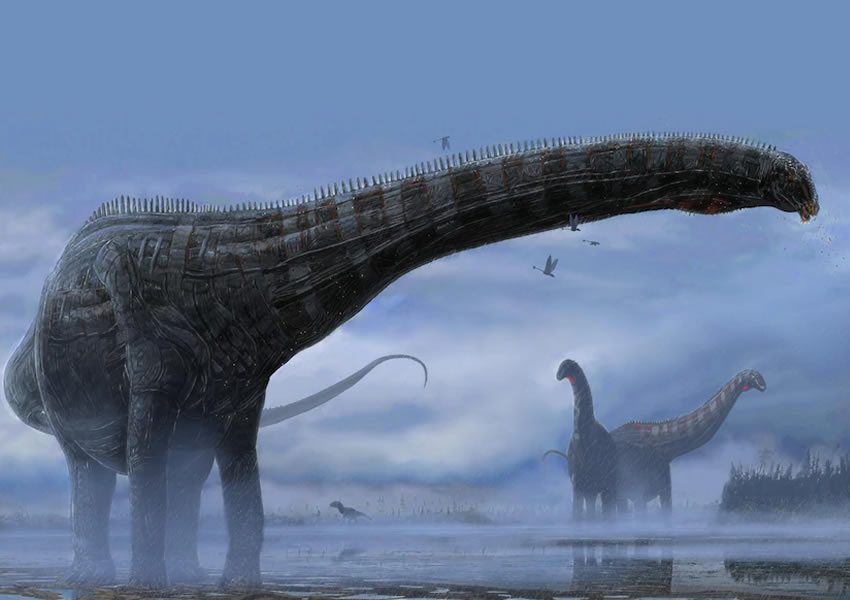 As if dodging carnivorous predators in the Jurassic swamp was not stressful enough, life would have been miserable for “Dolly” the dinosaur.

The large plant-eater probably suffered from a respiratory illness that triggered a bone infection, a new study of its neck bones suggests.

If the diagnosis is correct, Dolly would have been plagued by pneumonia-like symptoms such as coughing, sneezing, headaches, weight loss, and fever.

“If you could get in a time machine and go back to when Dolly was alive, you would have very easily been able to tell that something was not right,” Dr. Woodruff said.


This kind of infection, known as airsacculitis, is very common today in dinosaur descendants — birds.

But this is the first evidence of respiratory infection in a non-avian dinosaur, Dr. Woodruff and his colleagues report today in the journal Scientific Reports.

Dolly — officially known as MOR 7029 — was a hefty long-necked type of dinosaur known as a diplodocid.

When it roamed Montana about 150 million years ago, the area was a warm, humid coastal river system packed with plant-eating and carnivorous dinosaurs large and small.

About 18 meters long, Dolly still had a lot of growing to do and half its life to live when it died at around 15 years of age.

In 1990, a team of paleontologists dug up the front half of its fossilized skeleton, including its skull, some of its neck, shoulder, and rib bones.

Thinking it was diplodocus, the classic long-necked dinosaur, they nicknamed it “Dolly the diplodocus”.

This is a type of sauropod, a creature that belonged to the branch of the dino family tree that eventually evolved into birds.

“From an evolutionary perspective, Dolly is more closely related to a pigeon than it is to triceratops,” Dr. Woodruff said.

Given this lineage, paleontologists have long believed that sauropods and birds share anatomical traits including a complex respiratory system.

Just like birds, sauropods had a series of air sacs near and in their bones, said Stephen Poropat, an Australian sauropod expert not involved in the study.

“Sauropod dinosaurs are generally huge as adults. They have long necks, they have long tails,” Dr. Poropat of the Swinburne University of Technology and the Australian Age of Dinosaurs Museum said.

“If all of their bones were solid, their skeletons would have been immensely heavy.”

‘This has got to be a respiratory infection’

In 2014, Dr. Woodruff decided to dust off the fossil, which had been stashed away in a museum storeroom.

After scraping away the hard rock encasing the skull, he realized that Dolly was actually a different species related to diplodocus.

Then he decided to look at its neck bones. Strangely, the CT scans revealed the edges of the bone that would have been attached to air sacs were lumpy and bumpy.

“But I don’t work on injuries and traumas in the fossil record, it was out of my wheelhouse, so I literally just posted a picture on social media and just asked my colleagues, ‘What is this?'”

He immediately got responses from other paleontologists as well as anatomists and vets around the world.

“The group answer was basically, ‘Holy cow, this has got to be a respiratory infection.'”

There’s lots of evidence in the fossil record of dinosaurs suffering from injuries and bone diseases such as cancer, arthritis and infections like osteomyelitis, Dr. Poropat said.

But, he said, finding evidence of a soft tissue disease such as a respiratory disease was “pretty amazing”.

“A lot of the times when any disease or trauma is found in a dinosaur skeleton, it’s often in limb bones where you expect it to happen,” Dr Poropat said.

“Seeing it where the air sacs penetrate the vertebrae in a sauropod is quite unusual.”

And something was definitely amiss with the dinosaur’s neck bones, he said.

Instead of having a thin plate of solid bone running through the center of each vertebra, the middle of the bones was infiltrated by air sacs and telltale signs of disease.

“That’s abnormal; that’s not what we’d expect to see in a healthy sauropod.”

So what did Dolly in?

Looking closely at Dolly’s scans. Dr. Woodruff and the team quickly ruled out volcanoes as a culprit.

Inhalation of volcanic ash can cause a disease similar to mesothelioma.

“When these animals breathe in ash, the internal aspect of the bone is perfectly fine, they just develop weird growths on the outside,” Dr. Woodruff said.

They also found no evidence of volcanic ash in the sediment from where Dolly was extracted all those years ago.

The pattern of lesions also didn’t fit with lung cancer.

Instead, Dr. Woodruff and his colleagues think bacterial or fungal infections such as chlamydiosis and aspergillosis are prime suspects. These respiratory infections are common in birds today.

“We didn’t find anything that was 100 percent perfect match,” Dr. Woodruff said.

We don’t know for sure if the infection was bad enough to ultimately do Dolly in.

“In the entire dinosaur record, there really maybe only just a few fossils that we can say what killed the animal,” Dr. Woodruff said.

The Jurassic swamp would have been a very lonely place for a sick sauropod.

If Dolly was anything like herd animals today, it may have tried to isolate to recover, or just simply fallen behind the pack, Dr. Woodruff said.

“We don’t know whether Dolly could’ve just tipped over dead one day or was on its own and so visibly sick, making an easy target for a predator.

“But either way, I do think it ultimately led to the death of the animal.”