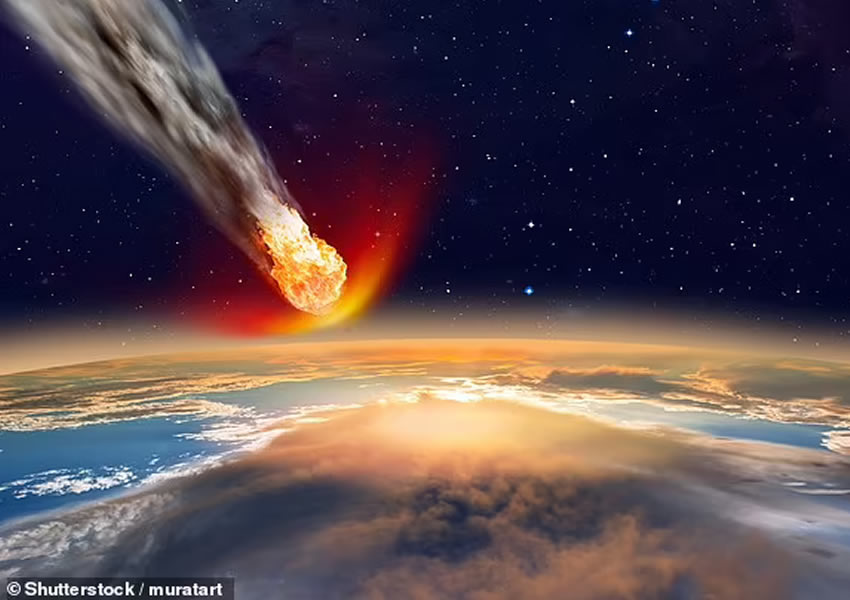 Firing a nuclear warhead at an asteroid on a collision course with the Earth could stop 99 percent of it from hitting the planet, according to a new study.

Every two years the Center for Near-Earth Object Studies at the NASA Jet Propulsion Laboratory in California runs a simulation on the result of an asteroid impact.

In this year’s scenario, a fictional 329ft (100m) asteroid, dubbed 2021 PDC, wasn’t detected until it was only six months from hitting the planet – not enough time to send up a spaceship to nudge it, or take any action on the planet to save many lives.

However, new research by Johns Hopkins University, in Baltimore, Maryland, found that a megatonne nuke, exploding near the surface of the asteroid, would destroy it without leaving thousands of large fragments still heading for the Earth.

‘If we employ a robust nuclear disruption technique by at least one month before impact, we can prevent 99 percent or more of the impacting mass from hitting the Earth,’ study lead author Patrick King told Gizmodo.

How it would work?

A large one megatonne nuclear warhead would be fired from Earth to the asteroid heading for the planet. This is 50 times more powerful than Little Boy, which was dropped on Hiroshima by the US in 1945. It would be set to detonate just above the surface of the asteroid. This would send a shockwave that should rip the space rock apart, causing it to fragment into thousands of much smaller pieces.


Experts tracked the likely trajectory and found if the nuke went up two months before the rock was due to hit the Earth, 99 percent of fragments would miss the planet. It is likely that the one percent that arrived should break up in the Earth’s atmosphere, causing no damage.

This is an idea that has become a staple of Hollywood disaster films, most famously in the 1998 movie Armageddon, in which Bruce Willis and a crew of deep-core drillers are sent up to a giant incoming asteroid to blow it up. Unlike in Armageddon, the Johns Hopkins University team believes it would be enough to just fire the nuke at the asteroid from the ground – no need to get Willis out of retirement.

This isn’t the first time NASA, or other planetary scientists, have investigated the idea of using a nuke to destroy an incoming asteroid, but the team looked at the potential path of the many resulting fragments. Previously, it was thought that even if we did succeed in blowing up a large space rock, some of the fragments would still be large enough to destroy cities and cause mass destruction.

Simulated exercises in May, funded by NASA, found that even firing a nuke at a space rock six months before it hit the Earth wouldn’t bring it down. However, the team from Johns Hopkins disputes these findings, taking a much closer look at the nuclear explosion and fragments caused by it ‘going up’.

The team included the impact the gravity of other planets in the inner solar system, such as Venus and Mars, might have on their trajectory and whether it could nudge them into hitting the Earth.

Their simulation found that this massive bomb, 50 times more powerful than Little Boy, which destroyed Hiroshima in WW2, would do the trick if ignited near the surface of a 328ft (100m) space rock on its way to the Earth.

They tested their findings at five different distances from the planet, finding it worked in all cases – so would be a viable option for last-minute arrivals. Obviously, the more in advance of the impact the nuke is fired, the better, as it further reduces the volume of incoming materials, they found.

This debris itself is known as a meteoroid. Most are so small they are vapourised in the atmosphere. If any of these meteoroids make it to Earth, it is called a meteorite.

Meteors, meteoroids, and meteorites normally originate from asteroids and comets. For example, if Earth passes through the tail of a comet, much of the debris burns up in the atmosphere, forming a meteor shower.

The larger the asteroid heading for the planet, the more in advance you’d need to fire the nuke in order to limit large fragments from still causing untold damage.

It is still possible to have 99 percent of the resulting fragments of a large asteroid miss the Earth, but you’d need to hit it six months in advance, rather than one or two months with a smaller rock.

‘We employed several approximations in order to make the study feasible, but we believe that we have captured the essential physics necessary to make general observations about nuclear disruption as a technique,’ King told Gizmodo.

‘Much of our uncertainty is driven by our inherent uncertainty in the properties of the asteroids themselves; we definitely need to support more space missions to investigate their properties in more detail.’

It wouldn’t always be a viable option, according to King, who said there is always a possibility of many smaller pieces still hitting the Earth, causing worse problems than a large impact.

‘By making several fragments instead of one single impactor, it is possible that we multiply the threat,’ he wrote in the paper.

‘On the other hand, disruption has its own advantages, and a disruption could succeed where a deflection might not. This is all part of the process of evaluating what technique to use.’

Even if we only find out about the rock at the very last minute, it could still be possible to ‘significantly reduce the scale of the disaster if we disrupt the object by as little as two weeks before impact,’ King said.

‘We find that disruption can be a very effective planetary defense strategy even for very late … interventions, and should be considered an effective backup strategy should prefer methods, which require long warning times, fail.’

The findings have been published in the journal Acta Astronautica.
‘Planetary defense!’ NASA will launch a November mission to deflect the ‘devastating’ asteroid from hitting Earth by NUDGING it with a spacecraft, the agency says

NASA is launching a mission to deflect an asteroid in deep space using a spacecraft at the end of November.

Known as the Double Asteroid Redirection Test (DART) mission, the U.S. space agency will send the DART spacecraft to a pair of asteroids – the Didymos binary – at 1:20 a.m. EST on November 24 aboard a SpaceX Falcon 9 rocket from Vandenberg Space Force Base in California.

In doing so, it will change the speed of Didymoon by a fraction of a percent, but it will be enough so NASA can measure its altered orbit. This will provide valuable input into future missions to deflect asteroids.

At roughly 160 meters (524ft) wide, Didymoon orbits a much larger space rock known as Didymos that is approximately 780 meters (2,559ft) across. Didymoon came relatively close to Earth in 2003, coming within 3.7 million miles.