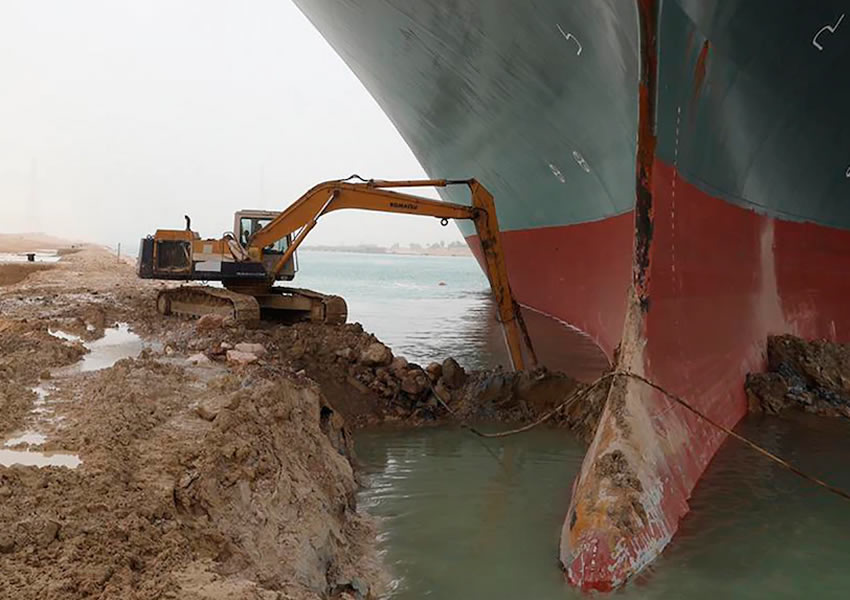 The blockage of the Suez Canal by a grounded container ship may disrupt world trade, but is unlikely to push fuel prices higher in the short term, experts say.

Giant container ship, the Ever Given, which got stuck diagonally across the canal on Tuesday (Egypt time), has blocked traffic in both directions on one of the world’s busiest shipping routes.

Around 12 percent of global trade in goods passes through the canal, which has some analysts concerned it could see supply disruptions and possible price rises.

“If it takes longer than a few days to move, it could exert further upward pressure on shipping costs and exacerbate goods shortages,” said Gabriella Dickens from Capital Economics.

“The grounding of the Ever Given could hardly have come at a worse time – freight rates for routes from Asia to the Mediterranean have already trebled since mid-November, with shipping capacity struggling to keep up with demand for traded goods.”

While it is hoped the vessel can be moved within days, the CEO of the Dutch company tasked with freeing the ship said it was possible it may take weeks. With the canal currently shut to new traffic, some shipping firms may opt to take the detour around southern Africa, but that comes at a cost in time and money.

“With bunker [ship fuel] prices plunging as low as $US250 per tonne in April, a third of their level at the start of the year, many operators opted to give a wide berth to Suez’s transit fees, which work out at roughly $320,000 for the average container ship,” noted Reuters columnist Ed Cropley.

“Ever Given has left shipping operators with a headache. With bunker prices back above $500 a tonne, the extra week round the Cape of Good Hope will cost $350,000 in fuel alone, assuming rough consumption of 100 tonnes per day.”

The rise in freight costs, both sea, and air, as well as shortages in some crucial components, such as computer chips, have raised fears that both producer and consumer prices will rise more rapidly than they have for many years.

Aside from increasing the cost of some goods you might buy in the shops, these inflation fears have been a key factor in recent financial market volatility.

Fuel prices may rise, but not because of Suez

While the price of some goods shipped via container might be affected by the current Suez crisis, a leading local analyst believes Australian fuel prices are unlikely to be pushed higher.

“Concerns around demand because of European and Indian COVID outbreaks and lockdowns are outweighing supply worries around the Suez blockage,” he said. This has been reflected in benchmark Brent crude oil prices. While oil prices bounced a couple of times this week in response to the Suez blockage, it had been from one-month lows, and both times they quickly fell back down again. Brent crude oil was trading at $US61.95 a barrel. However, Mr. Felsman warned some consumers may still see prices rise at local service stations.

He told ABC News that Sydney and Melbourne were currently near the low point of their retail fuel-discounting cycles, with average prices around $1.35 and $1.34 a liter respectively for basic unleaded petrol. With Easter approaching at the end of next week, Mr. Felsman warned that Sydney and Melbourne motorists could soon see average prices jump as high as $1.70 a liter, a level experienced by some Brisbane motorists over recent days at the peak of its retail price cycle.

Mr. Felsman tipped petrol prices in Brisbane to actually fall slightly heading into Easter as the discounting cycle resumes. “The retail cycle is more of an influence in prices in the near term than Suez,” he explained. Most of Australia’s refined fuel comes from Singapore, which sources most of its crude oil from the Middle East, which does not have to ship through the Suez Canal.

Mr. Felsman said, if anything, Australians should expect cheaper fuel prices over the next few weeks as the cost of refined products from Singapore had recently eased from 13-month highs.