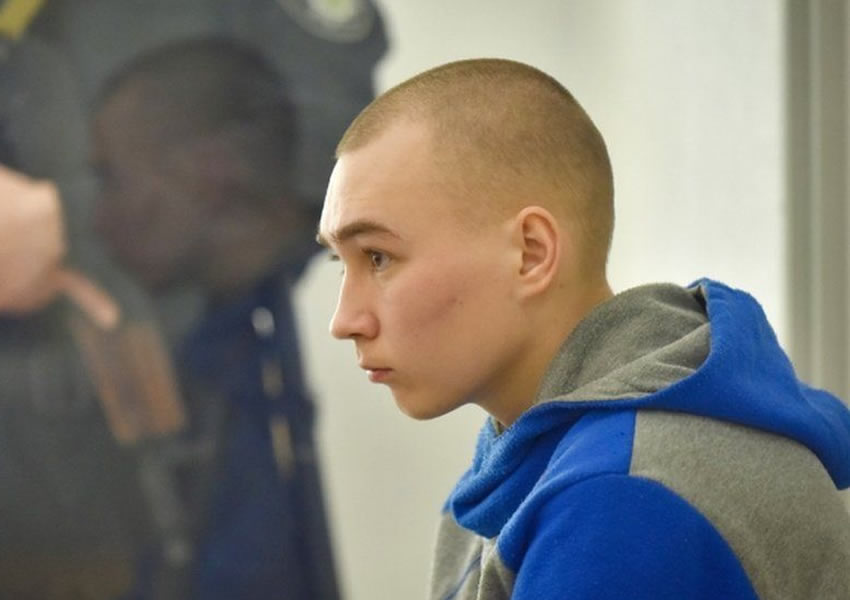 In the very first days of this invasion, a 62-year-old unarmed civilian was shot dead on a village street outside his Ukrainian home. His name was Oleksandr Shelipov.

Three months later and the captured Russian soldier accused of killing him is in Kyiv being tried for a war crime.

Standing up in court to confront the 21-year-old defendant on Thursday was Kateryna Shelipova, the widow of the man killed.

Did he repent his crime, she asked?

The Russian tank commander, Vadim Shishimarin, replied that he admitted his guilt and asked for her forgiveness. “But I understand you won’t be able to forgive me,” he added.

Kateryna Shelipova hadn’t finished. “Tell me please, why did you [Russians] come here? To protect us?” she asked, citing Vladimir Putin’s justification for the invasion of Ukraine.

“Protect us from whom? Did you protect me from my husband, whom you killed?”

The soldier had no answer to that.

This landmark trial marks the first time a Russian serviceman has been put on the stand for war crimes since the invasion of Ukraine was launched in February.

And perhaps such raw encounters are what such trials are about, at least in part. Forcing a soldier – who ignored all the rules of war – to face up to exactly what he has done and the suffering he has caused.

Sgt Shishimarin has pleaded guilty and Ukrainian prosecutors are asking for him to be sentenced to life imprisonment.

On Wednesday, Ms. Shelipova told me she actually felt sorry for the soldier, but she could not forgive him for this crime.

She heard the shots that killed her husband, then saw Sgt Shishimarin through her gate – holding his weapon.

Five minutes later she says she saw her husband’s body: “He was dead with a shot in his head. I started screaming very loudly.”

“The loss of my husband is everything to me,” Ms. Shelipova said, adding: “He was my protector.”

Recalling the events of 28 February, Vadim Shishimarin said he and a small group of other Russian soldiers had become separated from their unit and hijacked a car in order to return to it.

“As we were driving, we saw a man. He was talking on the phone,” the defendant said.

He claimed that he hadn’t wanted to fire the fatal shots, that he was following orders – threatened by another soldier if he refused to do as he was told.

“He said I would be putting us in danger if I didn’t. I shot him at short range. It killed him,” the 21-year-old tank commander told the court.

Interestingly, his defense lawyer – appointed by the state – told me that no Russian official has been in touch with him, including from its defense ministry.

There is no Russian embassy in Kyiv these days, so no contact from there either.

President Vladimir Putin’s spokesman yesterday told the BBC that the Kremlin has “no information” about this case.

All in all, it feels rather like the young soldier has been abandoned to his fate by the commanders who sent him to war and continue to deny that their forces commit crimes here.

We also heard from a second Russian soldier who witnessed the killing in February and later surrendered to Ukrainian forces.

Ivan Maltsev, another slight and young-looking 21-year-old, told the court how the Russian soldiers spotted Oleksandr Shelipov while they were driving the stolen car.

Mr. Maltysev claimed that Vadim Shishimarin was then ordered to shoot the victim because he was on the phone.

“Vadim didn’t do it. So the soldier, whose name I don’t know, turned round in the car and shouted that Vadim had to carry out the order, or we would be informed.

“At this point, we were almost alongside the civilian and, under pressure, Vadim fired. He fired three or four rounds.”

Ukraine has so far identified more than 11,000 possible war crimes committed by Russia.

Moscow has denied its troops have targeted civilians, but investigators have been collecting evidence of possible war crimes to bring before the International Criminal Court (ICC) in The Hague.

This trial is Ukraine’s chance to prove, beyond doubt, that a Russian soldier killed a civilian with no regard for the rules of war.

Its prosecutors know they are in the spotlight, proceeding so quickly, and in the middle of a war.

That is why they are keen to be as transparent and thorough as possible – so that this is not seen as a show trial, but as part of a vital quest for justice.