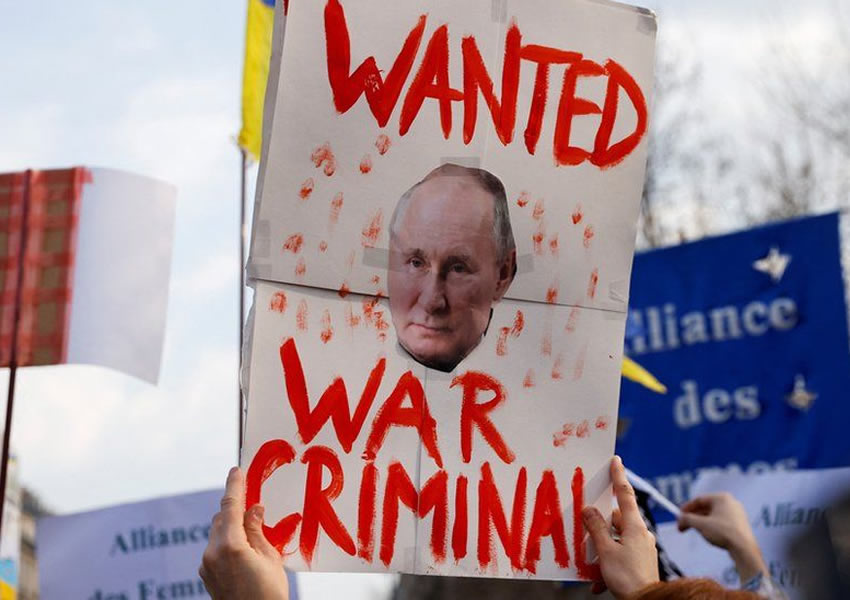 A Russian soldier has admitted to killing an unarmed civilian in the first war crimes trial to be held in Ukraine since the conflict began. Ukraine says it has identified more than 10,000 possible war crimes, but the Russian government denies the allegations.

The International Criminal Court has also sent a team of investigators and forensics experts to the country.

What is a war crime?

It may not seem like it, but “even war has rules”, as the International Committee of the Red Cross puts it. These are contained in treaties called the Geneva Conventions and a string of other international laws and agreements.

Civilians cannot be deliberately attacked – nor can the infrastructure that is vital to their survival. Some weapons are banned because of the indiscriminate or appalling suffering they cause – such as anti-personnel landmines and chemical or biological weapons.

The sick and wounded must be cared for – including injured soldiers, who have rights as prisoners of war. Serious offenses such as murder, rape, or mass persecution of a group are known as “crimes against humanity” or, in some circumstances, “genocide”.

What did the Russian soldier do?

The 21-year-old Russian tank commander Vadim Shishimarin admitted to shooting 62-year-old Oleksandr Shelipov in the head, a few days after the invasion began. Prosecutors said Shishimarin had been ordered to kill the unarmed civilian.


He is being tried in a Kyiv district court and faces life in jail.

“By this first trial, we are sending a clear signal that every perpetrator, every person who ordered or assisted in the commission of crimes in Ukraine shall not avoid responsibility,” Ukraine’s chief prosecutor Iryna Venediktova tweeted.

She previously said her office was preparing cases against 41 Russian soldiers for offenses including killing civilians, rape, bombing civilian infrastructure, and looting.

What other allegations of war crimes have there been in Ukraine?

US President Joe Biden and UK Prime Minister Boris Johnson have both accused Russia of carrying out war crimes in Ukraine.

Investigators and journalists found what appeared to be evidence of the deliberate killing of civilians in Bucha, a town on the outskirts of Kyiv, and other nearby areas.

Ukrainian forces said they found mass graves and evidence that civilians had been killed after their feet and hands were bound.

In March, a Russian strike on a theatre in Mariupol appeared to be the first confirmed location of a mass killing. The word “children” was written in giant letters outside the building. Ukraine previously called Russia’s airstrike on Mariupol’s hospital a war crime.

Many experts argue the invasion itself is a crime under the concept of “aggressive warfare”.

How can suspected war criminals be prosecuted?

There have been a series of one-off courts since World War Two – including the tribunal investigating war crimes during the break-up of Yugoslavia. A body was also set up to prosecute those responsible for the 1994 Rwanda genocide.

The International Court of Justice (ICJ) rules on disputes between states, but cannot prosecute individuals. Ukraine has begun a case against Russia. If the ICJ ruled against Russia, the UN Security Council (UNSC) would be responsible for enforcing that.

But Russia – one of the council’s five permanent members – could veto any proposal to sanction it. The International Criminal Court (ICC) investigates and prosecutes individual war criminals who are not before the courts of individual states.

It’s the permanent modern successor to Nuremberg, which prosecuted key Nazi leaders in 1945. Nuremberg cemented the principle that nations could set up special courts to uphold international law.

Can the ICC prosecute offences in Ukraine?

The ICC’s chief prosecutor, British lawyer Karim Khan QC, believes there is a reasonable basis to believe war crimes have been carried out in Ukraine.

Investigators will look at past and present allegations – going back as far as 2013, before Russia’s annexation of Crimea from Ukraine. If there’s evidence, the prosecutor will ask ICC judges to issue arrest warrants to bring individuals to trial in The Hague.

However the court doesn’t have its own police force so relies on individual states to arrest suspects – and since Russia is not a member of the court it is unlikely to extradite any suspects.

Could President Putin, generals, or other leaders be prosecuted?

It’s far easier to pin a war crime on the soldier who commits it, than on the leader who ordered it.

Hugh Williamson of Human Rights Watch – an organization with expertise in gathering evidence of war crimes in conflicts – agrees there is evidence of summary executions and other grave abuses by Russian forces.

He says establishing the “chain of command” is very important for any future trials – including whether a leader authorized an atrocity – or turned a blind eye to it.

The ICC can also prosecute the offense of “waging aggressive war”. This is the crime of an unjustified invasion or conflict, beyond justifiable military action in self-defense.

It originated at Nuremberg after the judge sent by Moscow convinced the Allies that Nazi leaders should face justice for “crimes against peace”.

However, Professor Philippe Sands QC, an expert on international law at University College London, says the ICC couldn’t prosecute Russia’s leaders for this because the country isn’t a signatory to the court.

In theory, the UN Security Council could ask the ICC to investigate this offense. But again, Russia could veto this.

Prof Sands wants world leaders to set up a one-off tribunal to prosecute the crime of aggression in Ukraine.