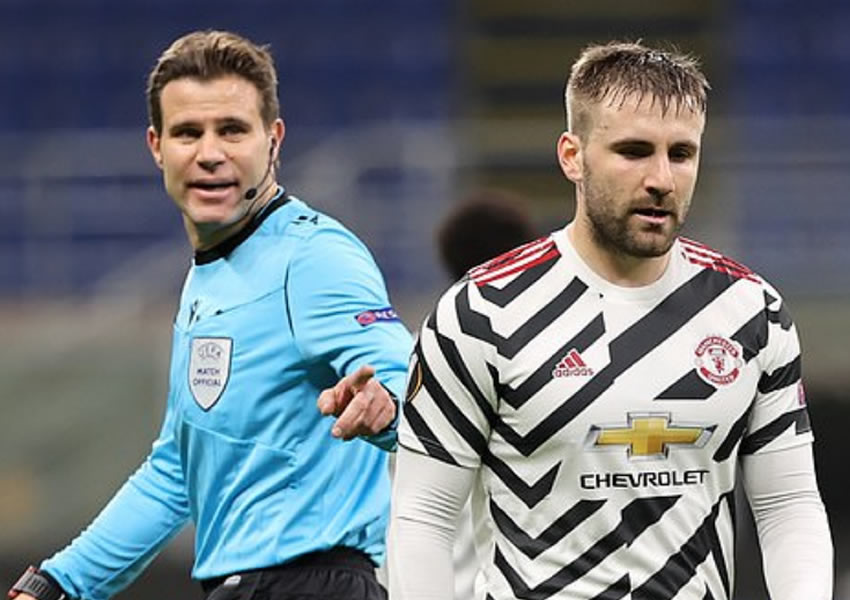 We were AWFUL! Luke Shaw slates Man United’s display despite beating AC Milan at the San Siro and hails ‘world class’ Paul Pogba for getting them into the Europa League quarter-finals

Luke Shaw conceded Manchester United were ‘awful’ in the first half against AC Milan but praised ‘world class’ team-mate Paul Pogba for seeing them through to the Europa League last eight.

The France midfielder scored the only goal of the game at San Siro just three minutes after coming off the bench to take Ole Gunnar Solskjaer’s men through with a 2-1 aggregate score.

United therefore remain on course to end their four-year wait for a trophy, with the FA Cup another possibility ahead of their quarter-final against Leicester on Sunday.

But speaking to BT Sport after the game, left-back Shaw admitted United were ‘lucky’ in the opening exchanges against Stefano Pioli’s men, but praised Pogba for ‘making the difference’.

‘Obviously, we’re very happy we’re through,’ Shaw said. ‘I’ll be honest, and the lads and staff would agree, we weren’t good at all especially first half we were awful.

‘The first 10-15 minutes, we started well, kept control of the ball but it was like a switch – we turned off, kept giving away balls, bringing pressure on ourselves and we were lucky.

‘Second half it always helps to have a world class player like Paul (Pogba) to make a difference and he did that.

‘But we know we need to be better than tonight. Obviously AC Milan are a top side, we knew it would be hard especially coming here.

‘The result was in our favour. It’s a very good win and the positive is that we are through, we have players coming back and the squad looks better.

‘It’s good times now and hopefully we can push on it’s a very important one on the weekend.’

England international Shaw, 25, himself came in for praise before the game, with Owen Hargreaves now believing he has overtaken Liverpool counterpart Andy Robertson as the best left-back in England.

‘Last year it was Andy Robertson, now it’s Luke Shaw. If he’s fit and healthy, he’s one of the best he’s proved that.

‘It’s been Luke Shaw and Bruno Fernandes, rotating the player of the months roles.

‘He’s been magnificent. When Bruno Fernandes has had a quiet day, he (Shaw) has stepped up.

‘In the last six weeks he’s been fantastic. Luke on that left hand side has been fantastic in terms of creating more than anyone apart from Bruno Fernandes.’