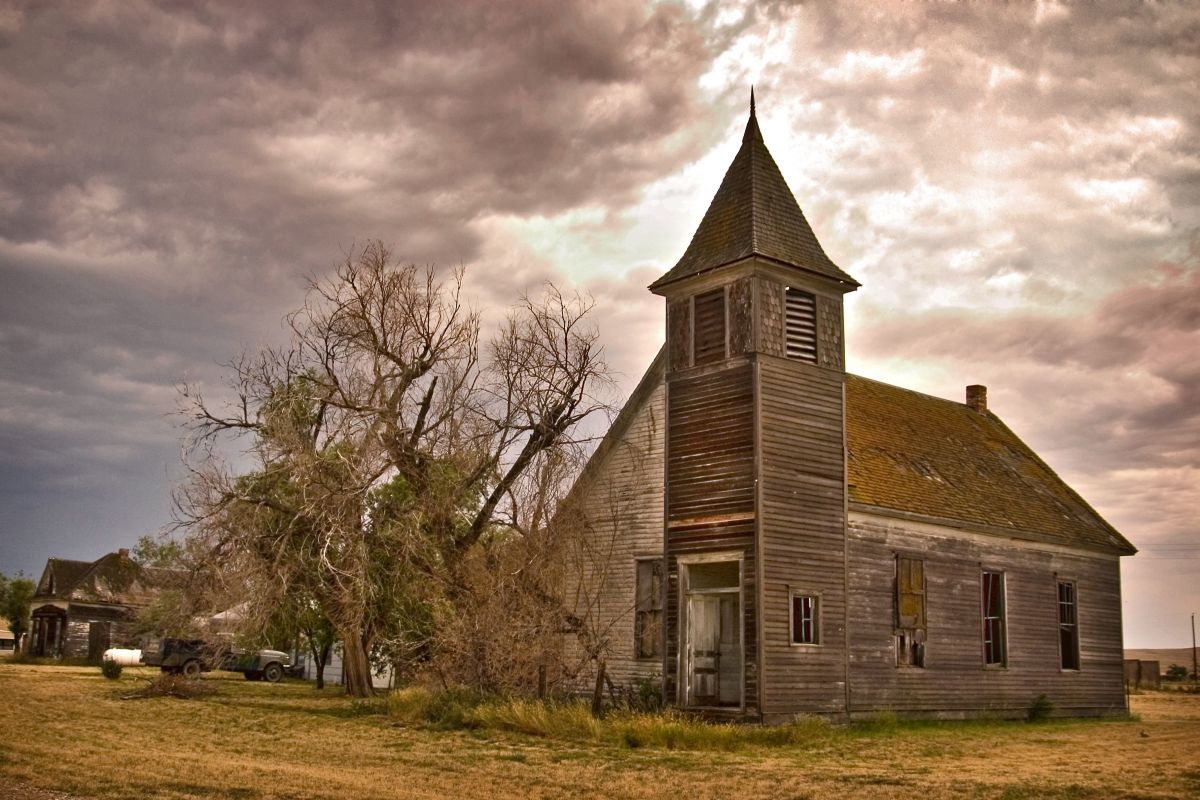 Take a step back in time while visiting these historic – and slightly spooky – ghost towns.

While the term “ghost town” may sound like a village haunted by spirits, it actually refers to an old, abandoned city. America’s western states are full of these towns; many were founded during the mining boom in the late 1800s to serve as home bases for miners. Today, these historically significant areas memorialize the once bustling populations that lived there and give visitors a chance to discover a past filled with mystery, legends and folklore. 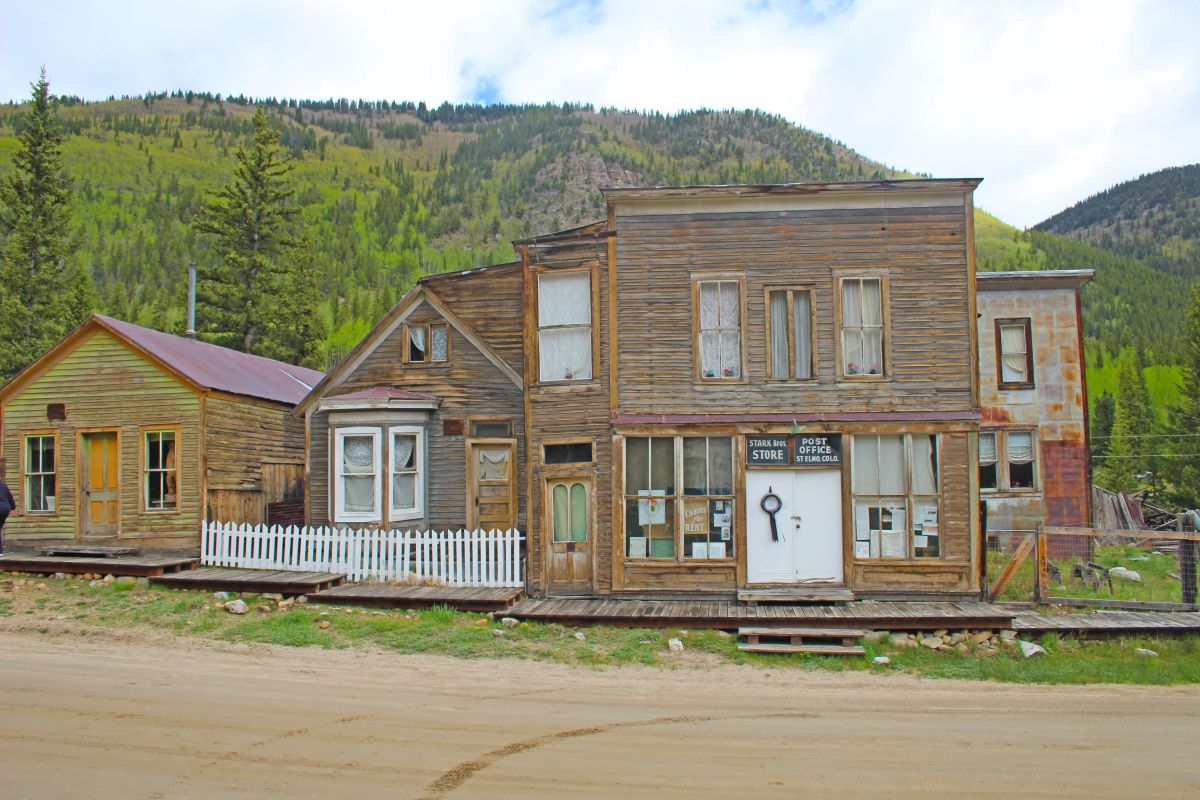 St. Elmo, located less than 83 miles southeast of Aspen, Colorado, is one of the state’s best-preserved ghost towns. Formed in 1880 for miners in search of gold and silver, the town’s final residents supposedly took the last train out in 1922 – and never returned. Today, you can visit St. Elmo by car or all-terrain vehicle to see several wooden storefronts, including the general store. For the ultimate mountain getaway, rent a log cabin. The infamous town of Tin Cup, Colorado, which is known for its ties to shady Wild West outlaws and a spooky town cemetery, also sits nearby. 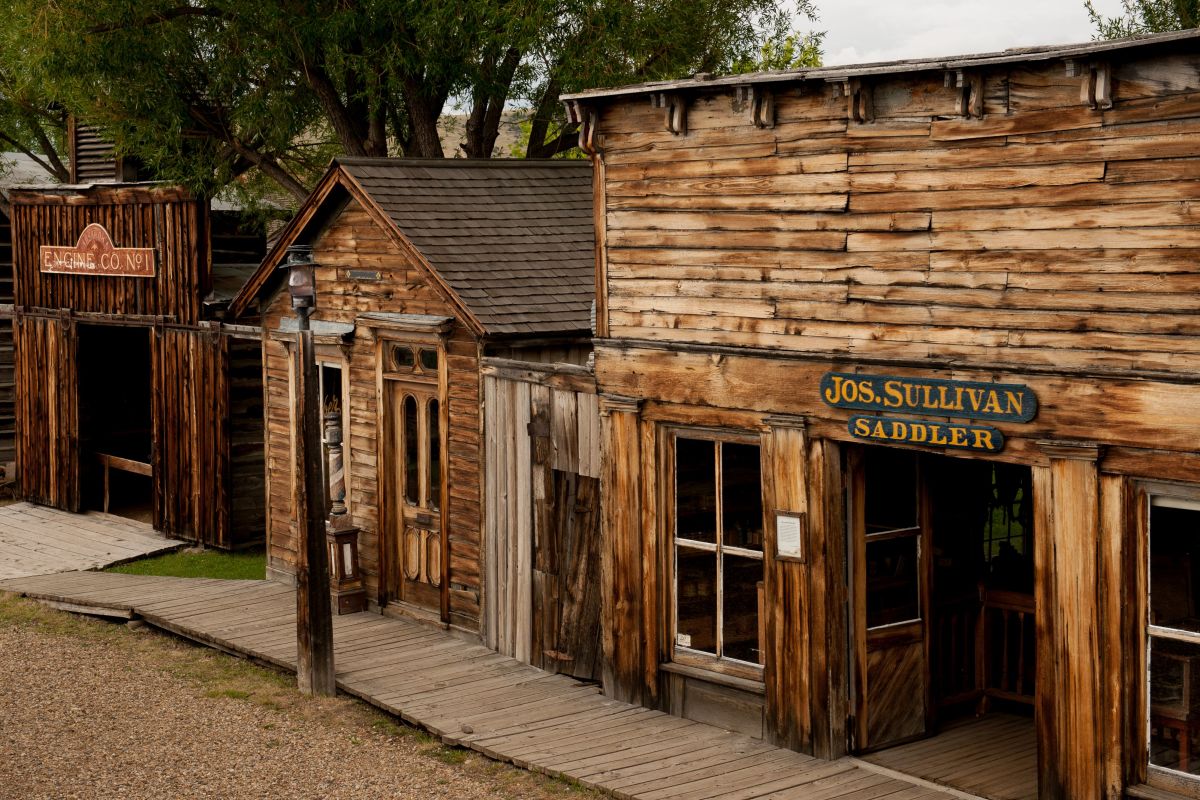 While enjoying Montana’s blue skies and breathtaking scenery, make a pit stop in Nevada City, a ghost town situated roughly 90 miles northwest of Yellowstone National Park. The restored former gold mining town boasts many original log structures along with a collection of antique music boxes, player pianos and calliopes. Admission starts at $8 for adults and $6 for kids ages 5 to 16 (younger travelers get in for free). During their visits, travelers can pan for gold, watch live reenactments of past events and embark on a 20-minute train ride between Nevada City and Virginia City, Montana. Stay the night in an authentic pioneer cabin or at the historic Nevada City Hotel, a former 1860s stage stop. 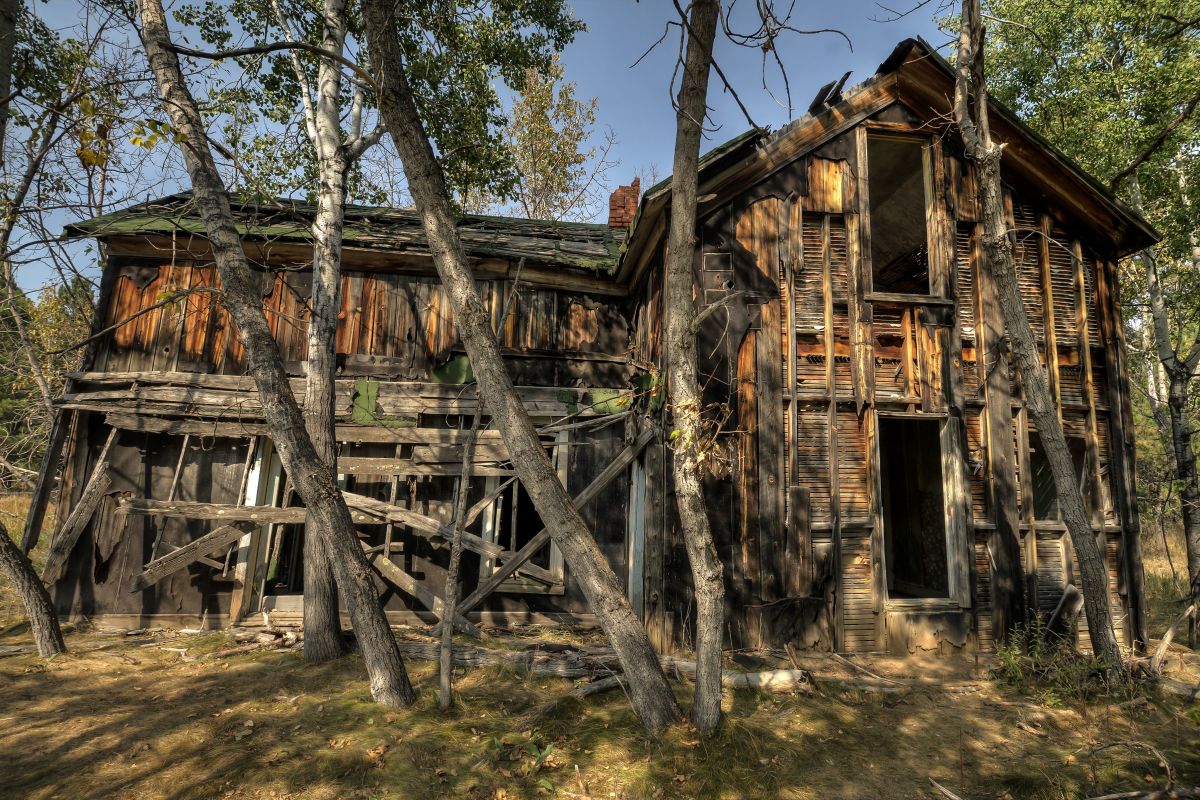 Located about 10 miles southeast of Mount Rushmore National Memorial in South Dakota’s Black Hills, Spokane features one of the area’s largest collections of original ghost town buildings. You’ll need to hike about a half-mile from the road to reach the town, which was built in 1890 near a mine with gold, silver, copper and more. Once in Spokane, you’ll find a large schoolhouse and several old cars lining the streets. To really set the scene, look for the grave that tells the story of a prospector who was shot and killed here. Just be sure to stay outside the abandoned structures, as they are crumbling. When you’re ready to retire for the night, head approximately 5 miles northwest to one of several hotels in Keystone, South Dakota. 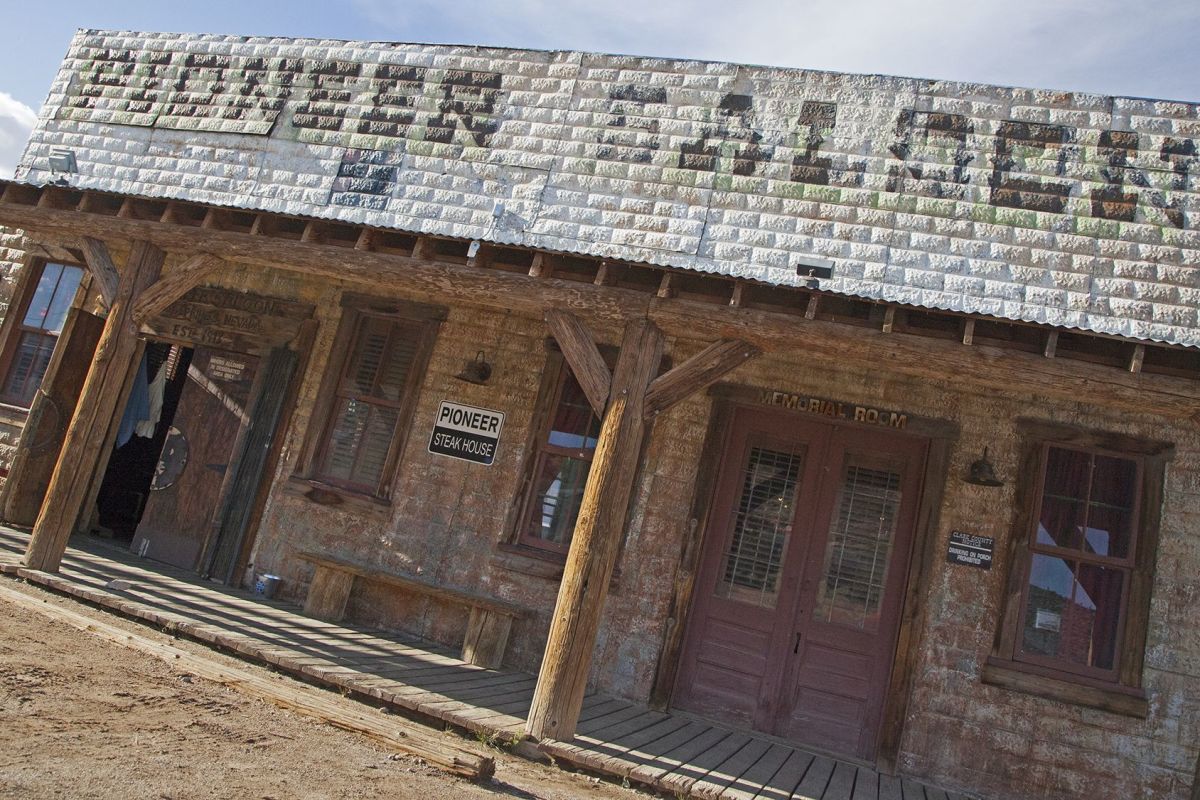 If you’re visiting Las Vegas and want to feel as if you’ve stepped back in time, consider taking a daytrip to Goodsprings, Nevada. Situated approximately 40 miles southwest of Sin City, this old mining town is home to around 200 people. It’s where you’ll find the Pioneer Saloon, which was built in 1913 and is said to be haunted by the ghost of 1930s movie star Carole Lombard, who died in a plane crash nearby. The saloon, where many movies have been filmed, offers a Haunted Lockdown tour that lets you relive the experiences of the TV show crew who filmed “Ghost Adventures” there in 2013. 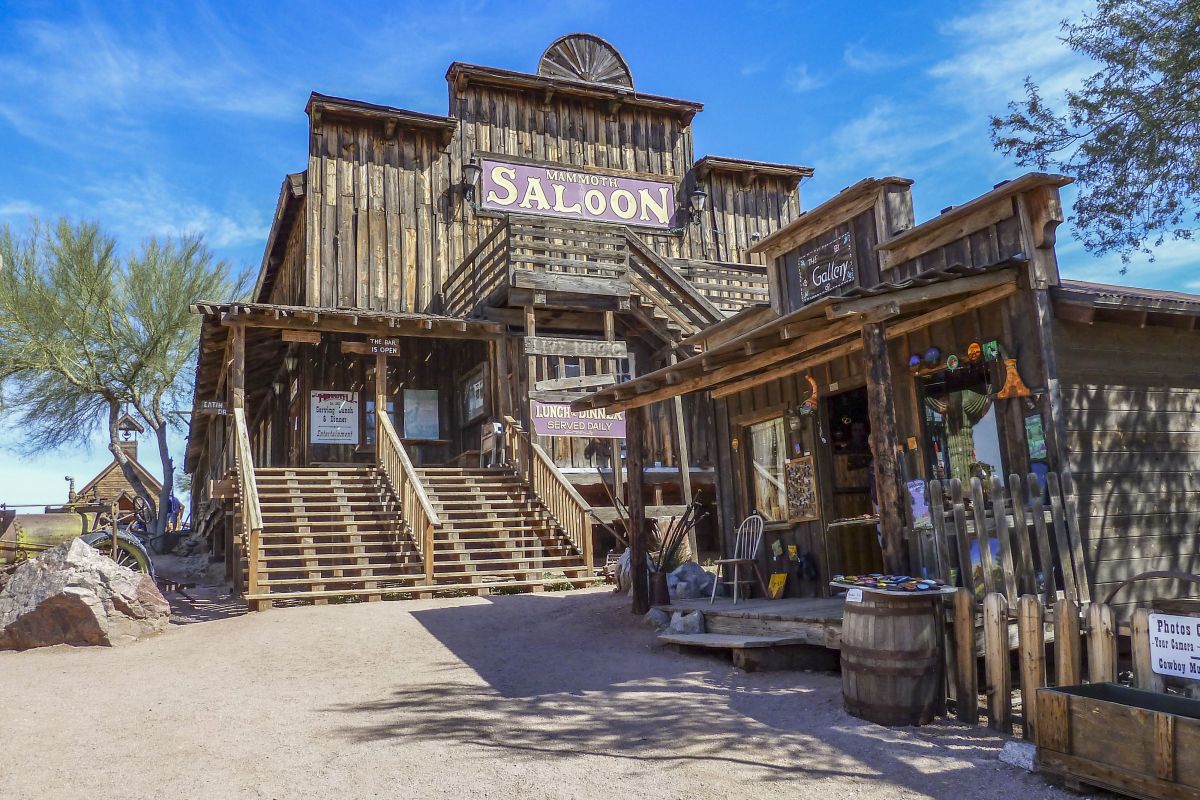 Situated along the Apache Trail about 40 miles east of Phoenix, Goldfield is known as the “gateway to the Superstition Mountains.” The town – which was home to multiple saloons, a boarding house, a blacksmith shop, a general store and a schoolhouse in the 1890s – will give you a true taste of the Wild West as you watch a live reenactment of a gunfight, ride the state’s only narrow gauge train and pan for gold. Other fun things to do include touring the local gold mine and going zip lining, horseback riding and target shooting. Book a stay at Santa Maria Place, a four-bedroom home located less than 33 miles away, through the luxury vacation rental website ThirdHome Rentals. 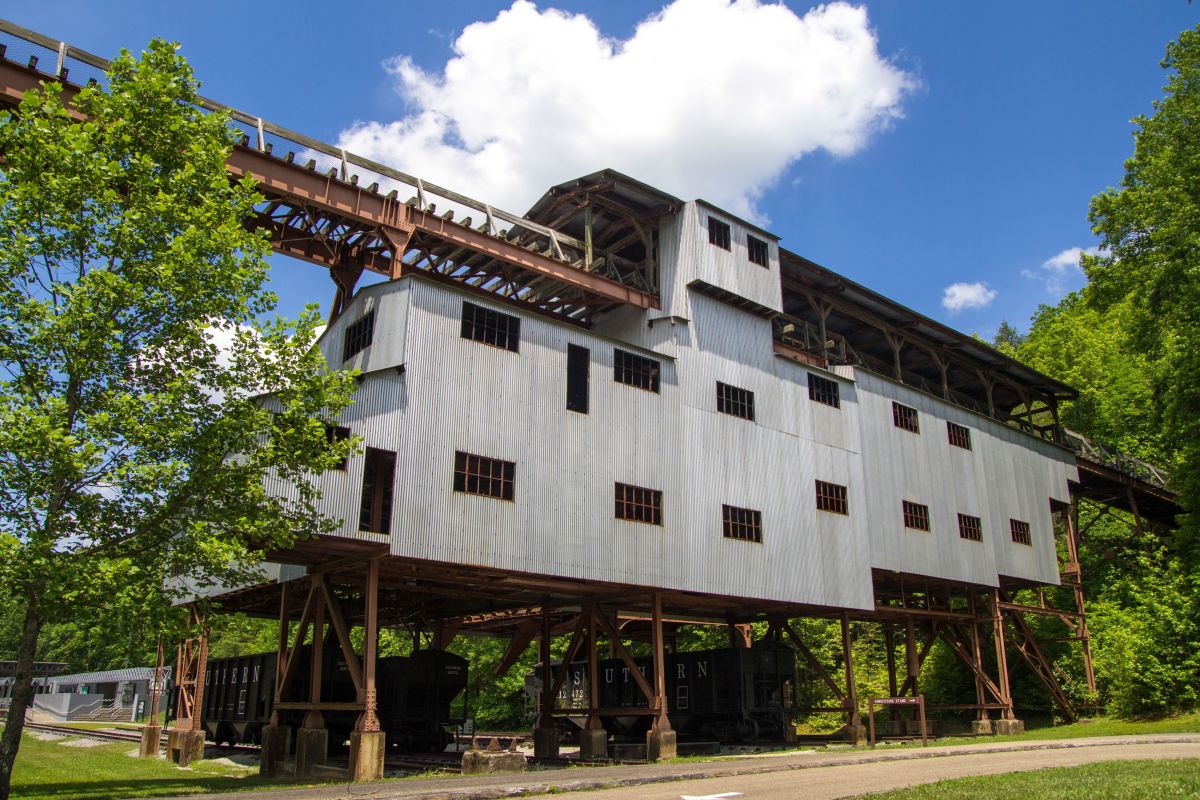 Get a dose of history in this abandoned mining community along the Big South Fork River near the Kentucky-Tennessee border. The mine, which was in operation from 1937 to 1962, features structures built in the 1980s to mimic those originally found on-site. Each building shares information about a different part of life in the mining camp through audio tours. Once a year, travelers can hop aboard the Big South Fork Blue Heron Ghost Train to visit the abandoned camp at night while listening to spooky tales. The free trip starts with live music, and visitors are advised to bring a flashlight. Vacationers will find comfortable accommodations at DuPont Lodge, which sits roughly 30 miles northeast in Cumberland Falls State Resort Park. 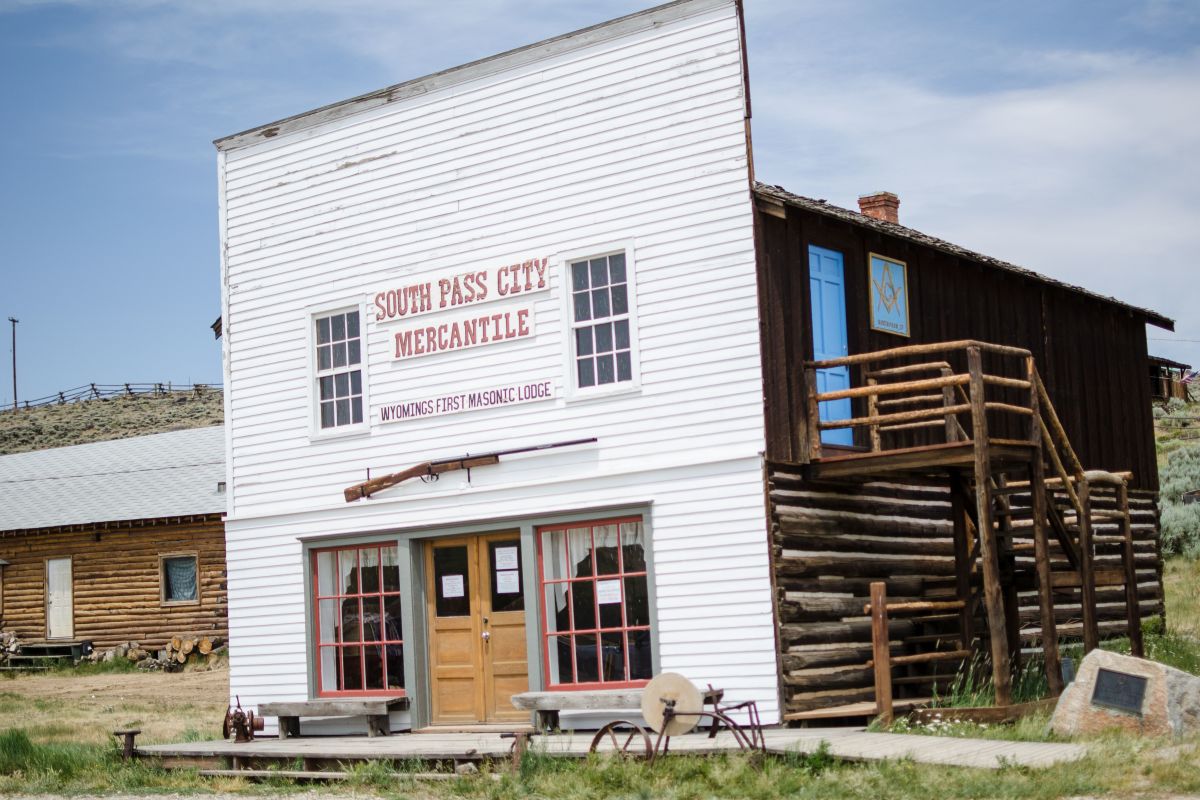 See 24 19th-century buildings at one of Wyoming’s largest historic sites. Open to visitors every year from mid-May to mid-October, South Pass City once featured more than 30 gold mines. The town also played an important role in women’s history: It is where a bill was passed to make Wyoming the first territory where women could vote and hold public office, and is where the country’s first female judge served. After travelers immerse themselves in South Pass City’s past, they can venture 34 miles northeast to Lander, Wyoming, where everything from smaller boutique hotels, such as The Mill House, to larger properties like the Shoshone Rose Casino & Hotel are available. 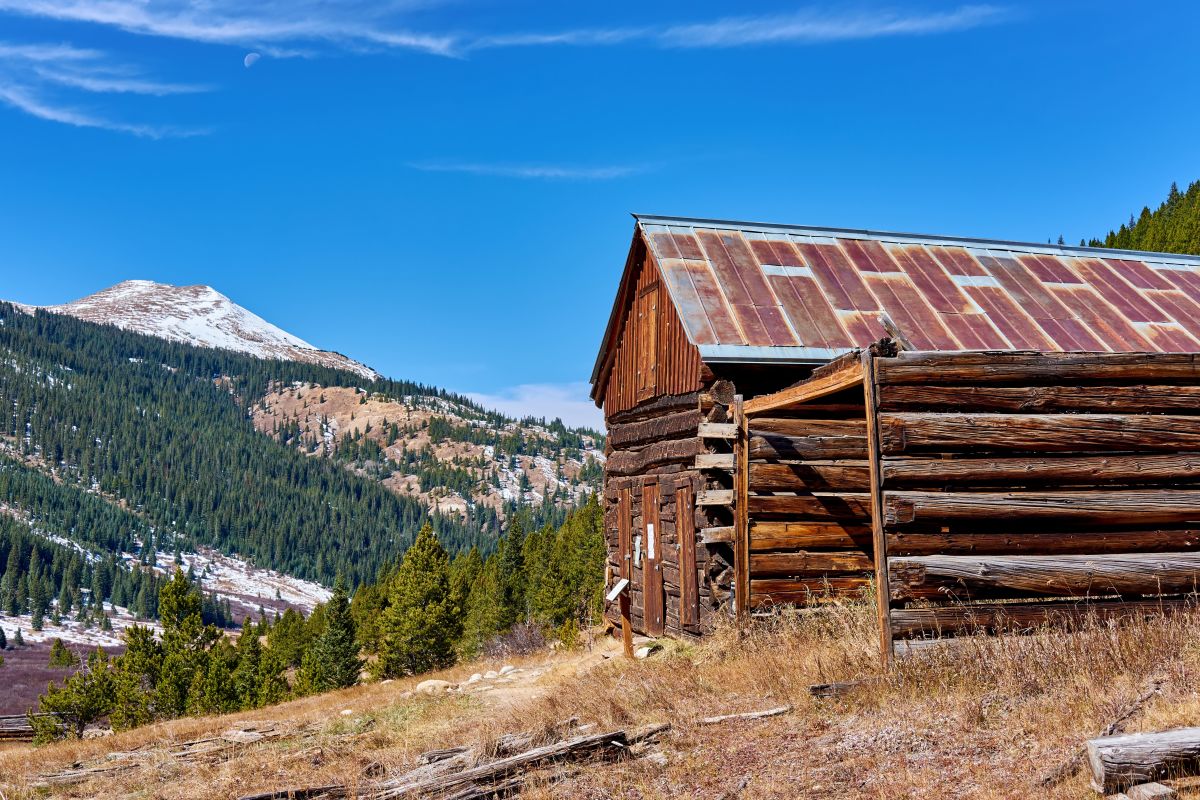 Located just off the Independence Pass section of U.S. Highway 82, the town of Independence is an easy stop on the way to or from Aspen. The town was founded in 1880 but was deserted just 19 years later when miners wearing wooden skis made from the town’s dismantled cabins left in droves during a severe winter storm. Today, you can wander through several original buildings, including stables, a general store and a cabin. You can even see metal remnants from stagecoaches and tin cans, but you may not remove anything from the site. The best time to visit is between late June and late August, though the property welcomes visitors year-round. For pleasant accommodations, stay in Aspen at Hotel Jerome, The Little Nell or the Viceroy Snowmass. 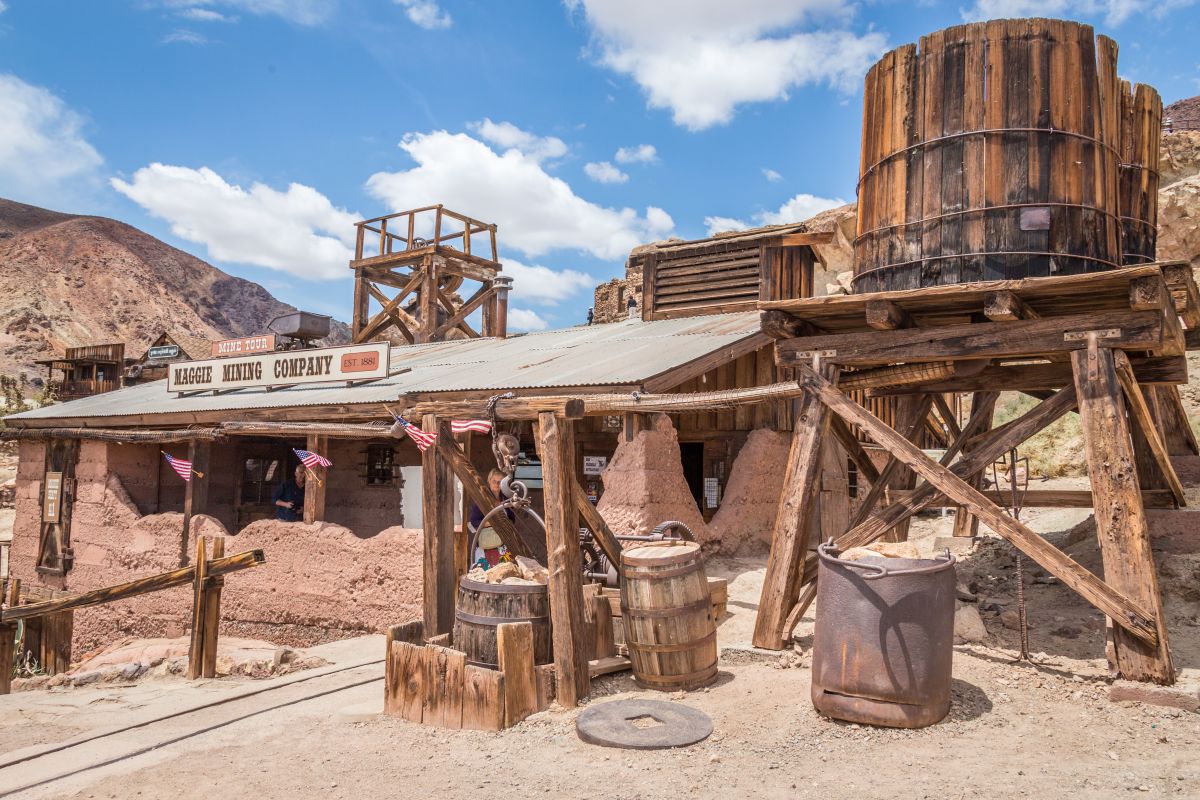 People flocked to this area 126 miles northeast of Los Angeles during California’s largest silver strike in 1881. The region once boasted 500 mines, but when silver lost its value in the mid-1890s, all of Calico’s inhabitants left. Today, most of the State Historical Landmark-designated town’s original buildings have been restored. You can tour some of the structures during your visit, but you’ll also want to save time for exploring a silver mine, enjoying a ride on the Calico Odessa Railroad and participating in a Saturday night ghost tour. When visiting Calico, it’s best to camp at one of 265 sites nearby. If you’re not interested in roughing it, you can find some affordable hotels in Barstow, California, which sits 12 miles southwest of Calico. 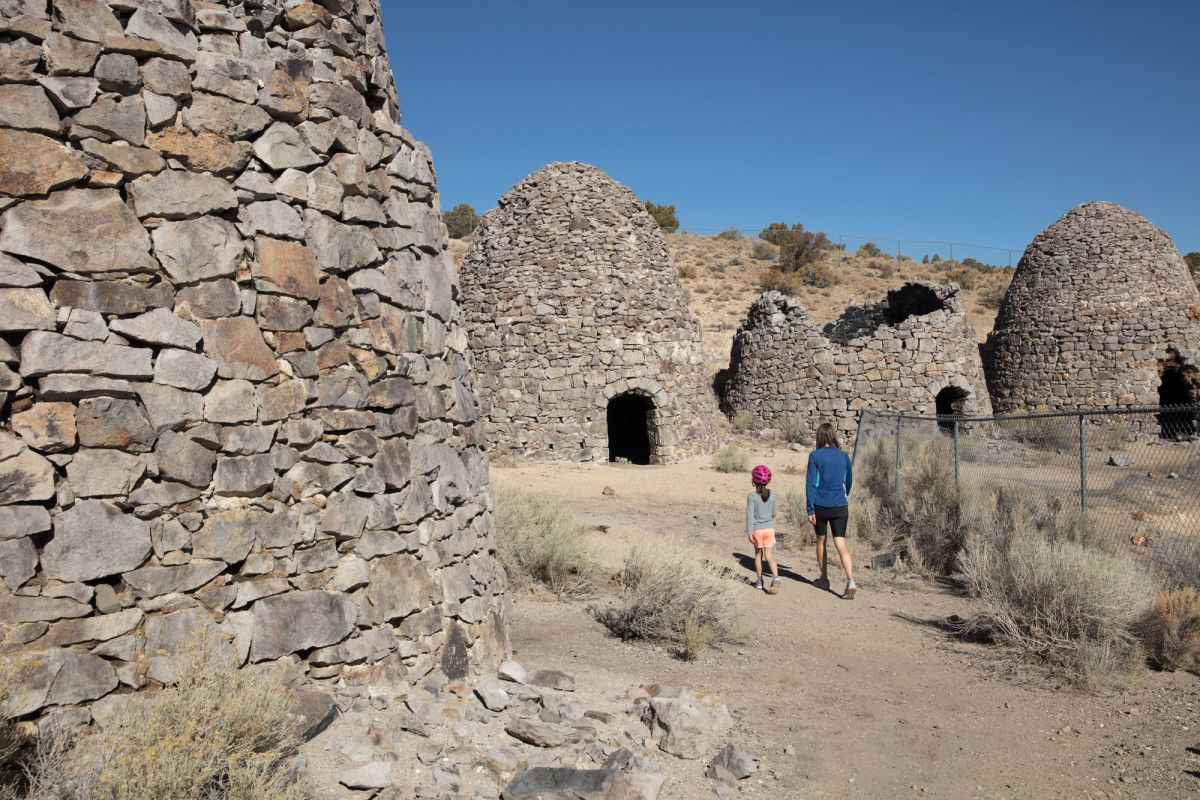 When visiting Frisco, be sure to check out its unusual charcoal kilns made from stone. These kilns, which look like they belong in a “Star Wars” movie, earned Frisco a spot on the National Register of Historic Places. The town was founded to house silver miners who worked at the nearby San Francisco Mine. It featured 20-plus saloons and was known as a violent area. In fact, one murder was reportedly committed here every day. Sights to see include a cemetery, rusty mining equipment and the remains of several buildings. Frisco is more than 100 miles from both Zion National Park and Bryce Canyon National Park, making it a great stop along the way to or from either destination. You can find accommodations about 45 miles southeast in Beaver, Utah. 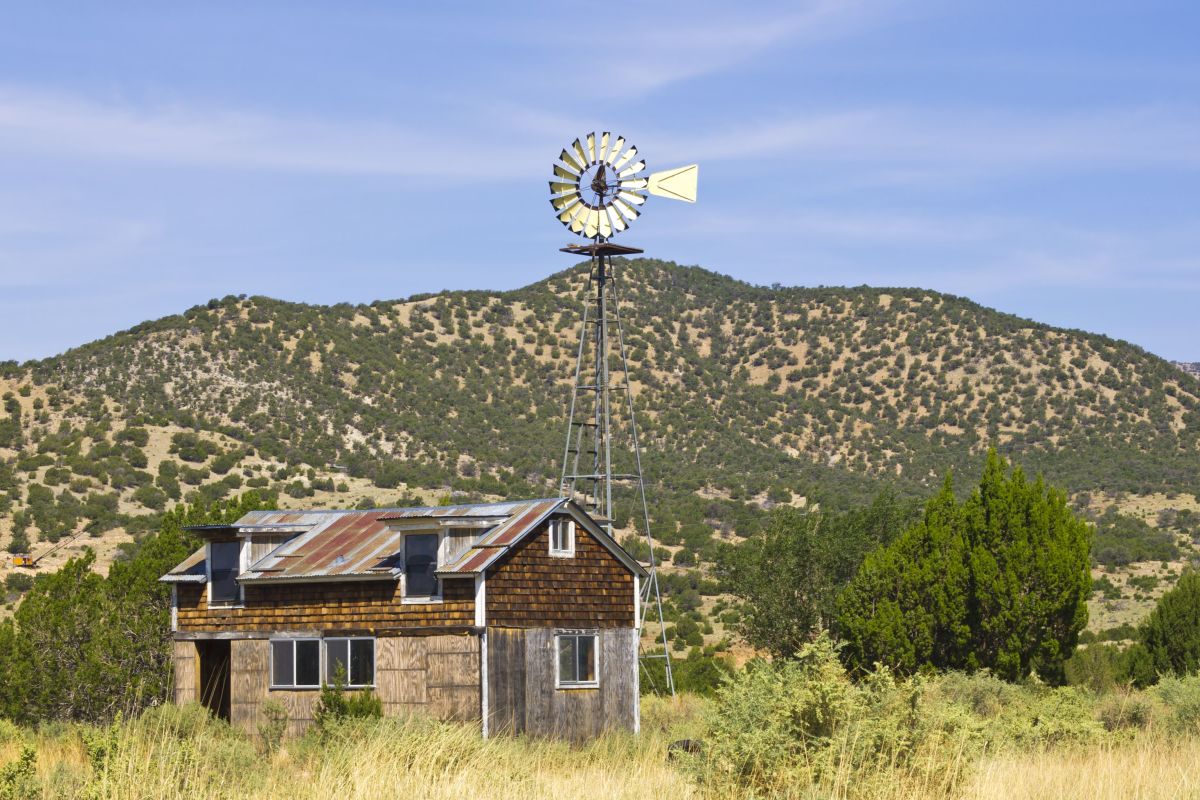 Once a thriving town built on the gold found in nearby Baxter Mountain, the abandoned town of White Oaks was one of outlaw Billy the Kid’s favorite places to visit. The relatively upscale community had luxurious Victorian homes and was formerly the second-largest city in New Mexico. Nowadays, you can explore the area’s cemetery and saloon, among other historic sites. White Oaks is situated 12 miles northeast of Carrizozo, New Mexico, where you’ll find a variety of bed-and-breakfast accommodations, recreational vehicle parks, guest ranches and motels. You can also plan a daytrip to White Oaks from Albuquerque, New Mexico, which is located roughly 155 miles northwest. 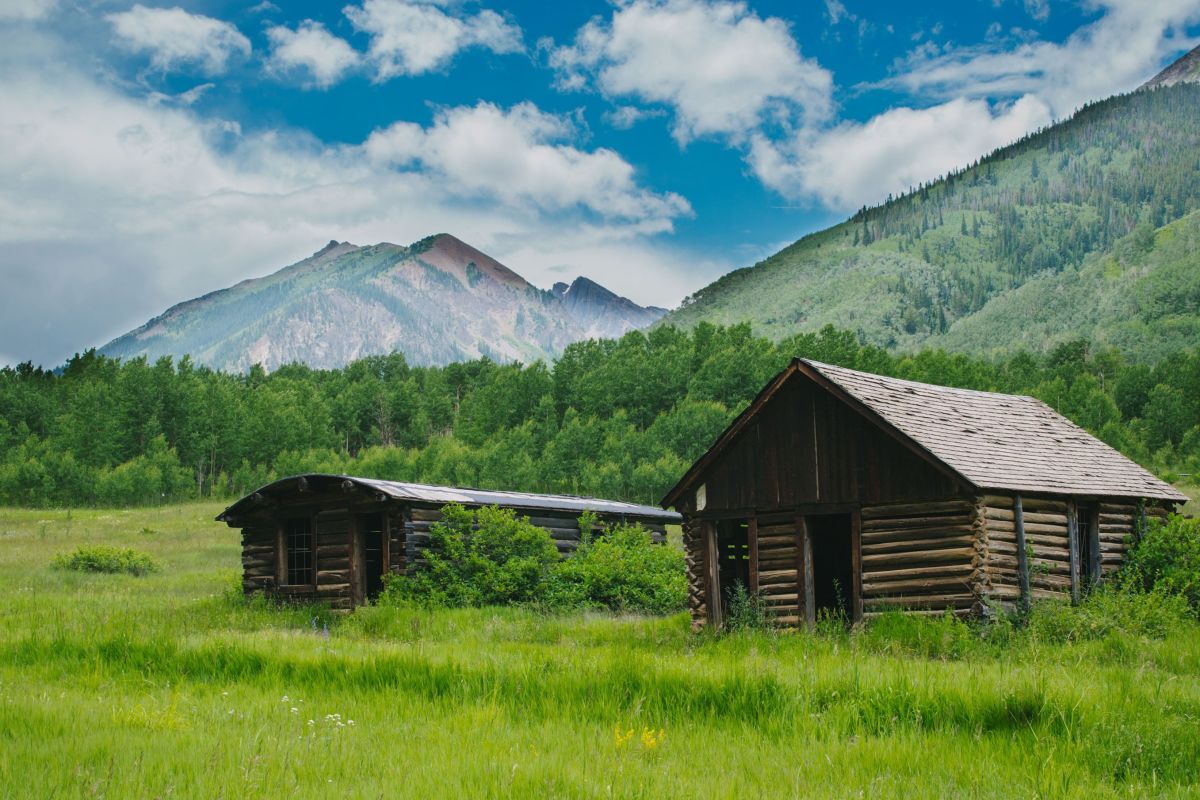 Located less than 13 miles south of Aspen, present-day Ashcroft features the remnants of a silver mining town. In 1883, the former camp blossomed into a town with about 2,000 residents, two newspapers, a school, a courthouse and 20 saloons. By 1885, just 100 summer residents were left. Today, visitors can see several restored structures like the Blue Mirror Saloon, a post office and a hotel. To learn more about the town’s mining past (plus its brief use by army groups for mountaineering training), travelers can take a guided tour of the site with an Aspen Historical Society docent between mid-June and early September. Admission is $5 for adults and free for visitors ages 18 and younger. The ghost town permits self-guided tours during the fall, winter and spring. 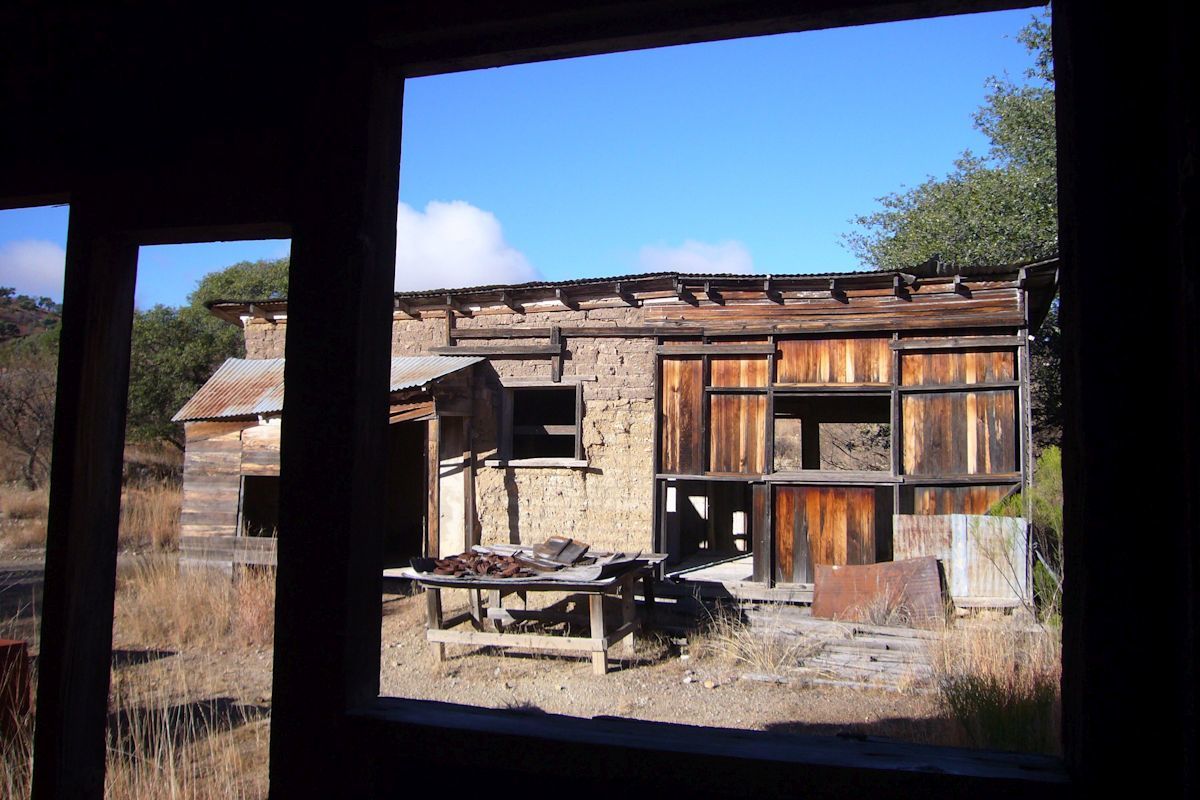 Previously the largest mining camp in southwest Arizona, Ruby’s miners struck gold for the first time in the late 1870s. The mine closed in 1940, but the mine buildings and equipment, a school and a playground still remain. There’s also a small cemetery with piles of rocks as modest grave markers. Activities available in and around Ruby include hiking Montana Peak – which sits just 4 miles north of the U.S.-Mexico border – and fishing on private lakes. You can choose to rough it by staying at one of several local campsites (which offer no water, food, firewood, shelter or electricity), or you can head to a nearby town like Nogales, Tubac or Amado for the comforts of a resort, hotel or motel. Additional accommodation options are available 71 miles northeast in Tucson, Arizona. 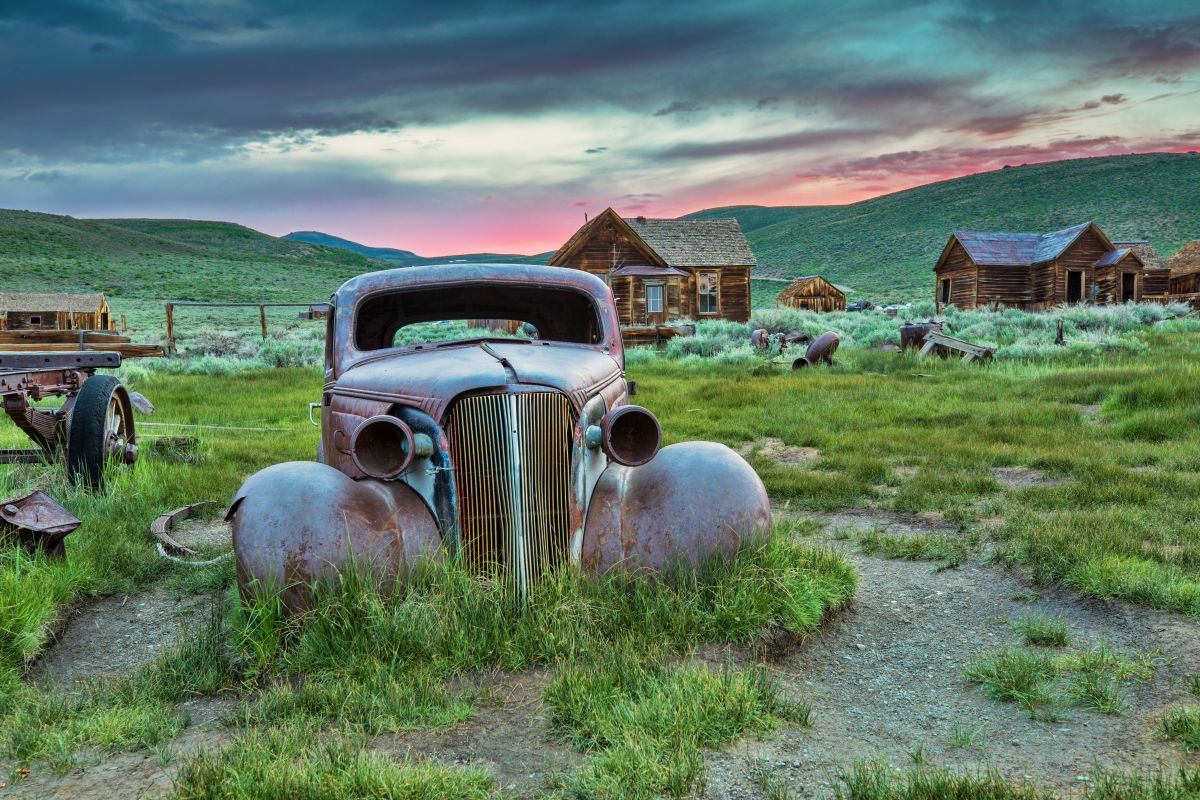 About 45 miles northeast of Yosemite National Park sits the California town of Bodie, which once thrived as a source of gold with some 10,000 residents. History buffs will love the period images printed on newspapers stuffed into walls as insulation. Visitors will also discover a wooden church, a cemetery, gas pumps and the remains of old trucks. The interiors of some buildings are left just as they were – in some cases, they’re even stocked with goods. Now part of Bodie State Historic Park, the town offers ghost tours featuring guided commentary about local ghost stories and legends three nights a year. For accommodations, head approximately 20 miles northwest to Bridgeport, California. 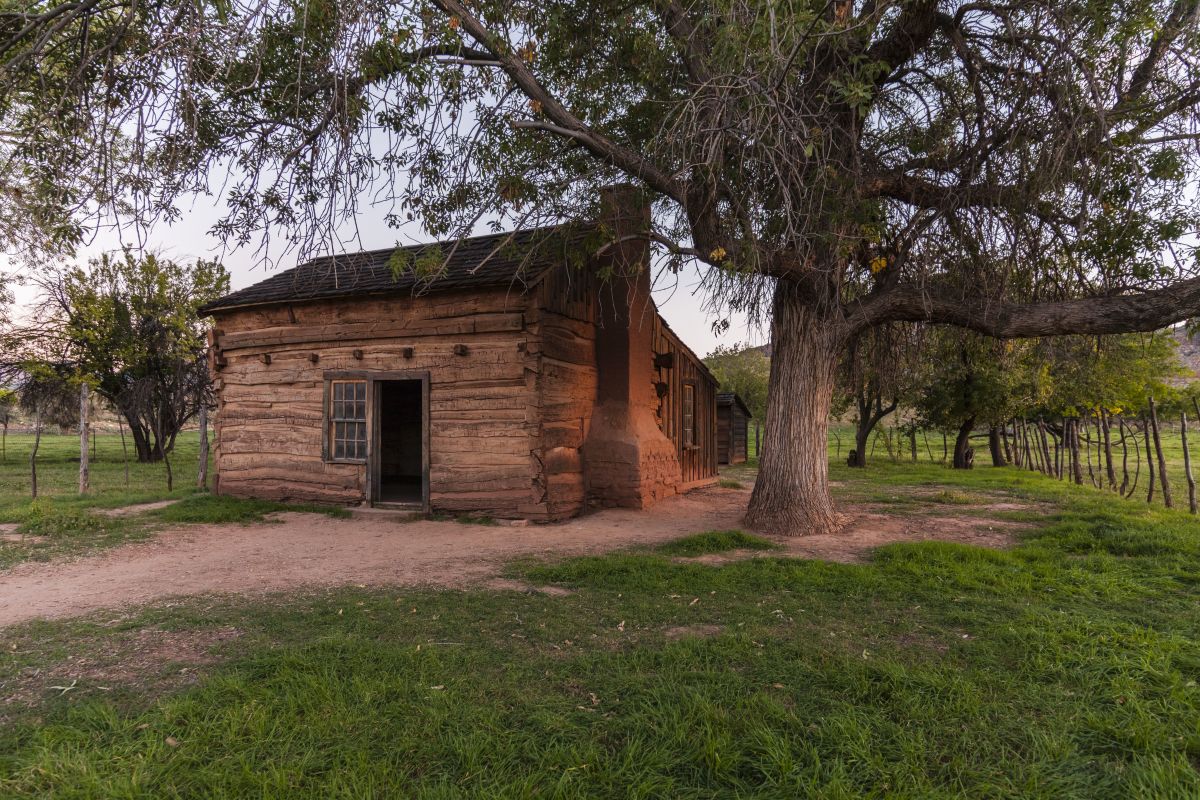 Located on the southwest border of Zion National Park, the abandoned town of Grafton makes for a fun day excursion. Grafton was settled in 1859 by Mormons looking to establish towns throughout the state. The town’s schoolhouse is said to be one of the most well-preserved abandoned buildings in all of Utah’s ghost towns, and travelers can also see several restored homes and the town cemetery while visiting. Plus, Grafton offers panoramic mountain views and makes an appearance in the movie “Butch Cassidy and the Sundance Kid.” Various hotels and accommodation options are available in the larger town of Springdale, which sits 7 miles northeast of Grafton.