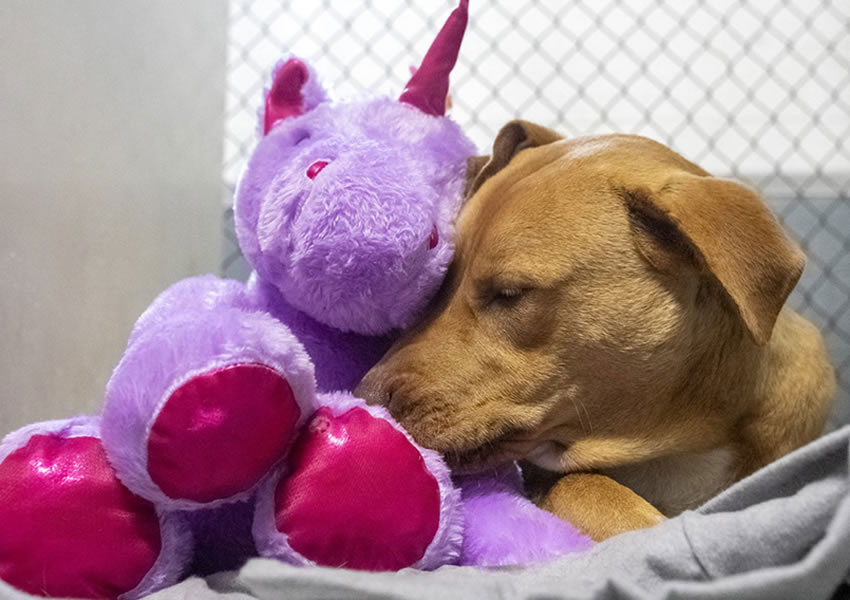 Dogs may be man’s best friend, but apparently, a unicorn — a stuffed purple one at that — is a dog’s best friend.

Animal control officers were called to a North Carolina Dollar General store after a stray dog kept coming into the store and beelining for the toy aisle.

“He went straight for the unicorn, the same one every time,” says Joe Newburn, a supervisor at Duplin County Animal Services. “It was so strange, one of the strangest calls I’ve ever dealt with,” Newburn adds.

Workers at the Kenansville store (about 80 miles from Raleigh, North Carolina, USA) told animal control officers that they caught the Lab mix darting into Dollar General every time a customer exited. Each time the stray dog made it in, he went to grab the same plush purple unicorn toy.

“Finally, they had to lock the door and called us,” Newburn tells about how animal control became involved in this playful pooch’s story.


Samantha Lane, the officer who responded to the Dollar General store’s call, was so taken with the dog’s devotion to the unicorn that she bought the $10 toy for the dog. According to Newburn, the canine was happy to head off with Lane once he had his beloved stuffed animal.

Lane brought the dog to a Duplin County Animal Services shelter, where workers named him Sisu after the dragon cartoon character in Disney’s new film, Raya and the Last Dragon. 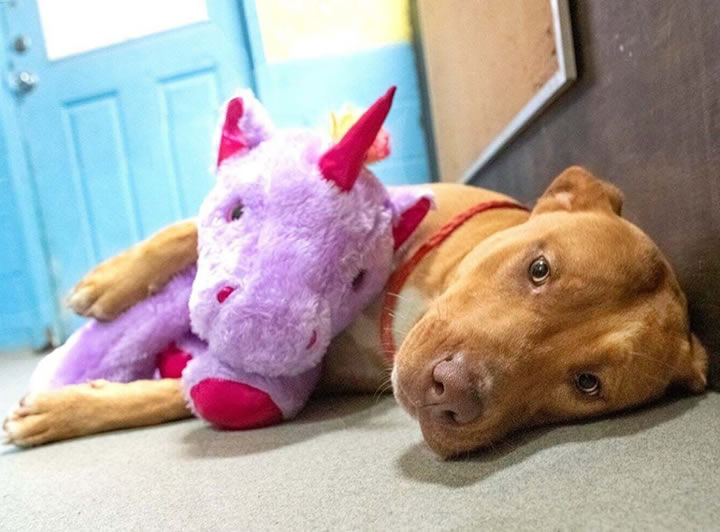 The only thing we can think is that he came from a home where he had a similar stuffed animal or kids in the home did,” Newburn adds.

Shortly after Sisu arrived, the shelter posted a picture of the pup and his unicorn on their Facebook page with a caption that read, “This is what happens when you break into the Dollar General consistently to steal the purple unicorn that you laid claim to but then get animal control called to lock you up for your B & E and larceny but the officer purchases your item for you and brings it in with you.”

Sisu is currently considered a stray intake at the shelter because no one has come forward to claim him, but the pooch obviously loves affection. He spends every night curled up with his unicorn at the shelter.

“It’s so sweet. It’s amazing. I mean, he’s obviously super smart, and even when we got him to the animal shelter, he’s been very obedient.

He sits, shakes. Someone should be looking for him,” Newburn says. “I don’t know of any other reason why he would focus on the unicorn other than he had one at home. If the store had called and said he tore open dog food, that would make more sense but not hunting for a purple unicorn.”

Newburn says the shelter has received numerous calls from people interested in giving Sisu — and his beloved unicorn — a forever home.

And it looks like it’s time for the pair to pack their bags because, according to a Friday Facebook post from Duplin County Animal Services, Sisu and his stuffed animal have an adopter and will be moving out of the shelter soon.

“We are glad to see Sisu is happy with his new toy!” Luce added.