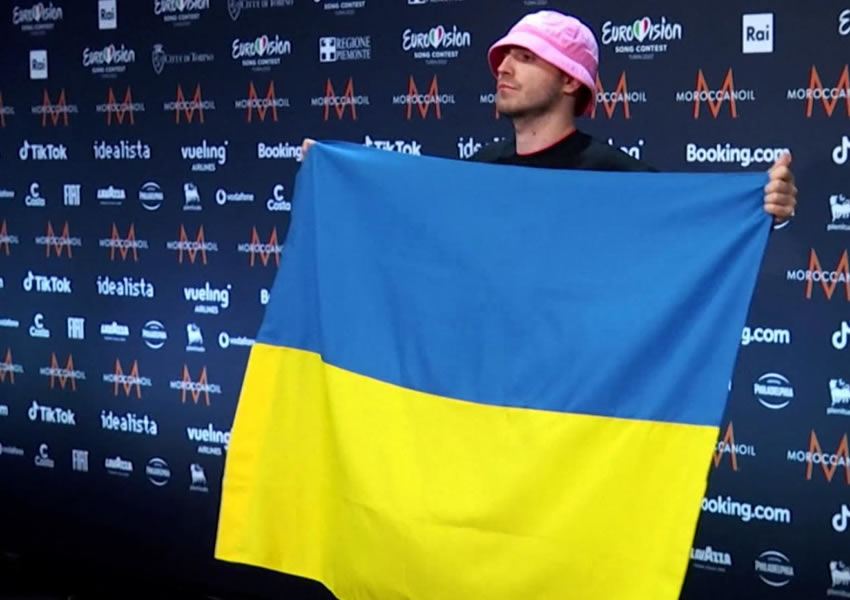 It tells you plenty about the Eurovision Song Contest that Norway’s participants — two grown men in wolf costumes who sing about bananas and the imminent consumption of their grandparents — are flying relatively under the radar this year.

The continent’s garish and much-loved singing competition returns to Turin, Italy on Saturday, but only one group is commanding the spotlight in the build-up: Ukraine’s Kalush Orchestra.

The folk-rap group are runaway favorites in the betting markets and their presence at the tournament has captured the imagination of fans from every competing country.

“As we speak, our country and our culture are under threat. But we want to show that we are alive, Ukrainian culture is alive, it is unique, diverse, and beautiful,” Oleg Psyuk, the band’s frontman, told CNN. “This is our way to be useful to our country,” he said.

At first sight, the six-piece group seems to slot in comfortably with dozens of their more eccentric Eurovision brethren.

Most members wear elaborate national dress, with rapper Psyuk also sporting a pink bucket hat. One member is so submerged by patterned embroidery that only his mouth is visible, while the group’s double bassist comes dressed as a ball of yarn.


But getting Kalush Orchestra to the Eurovision stage took some doing, and their journey is deeply interwoven with the war at home.

The band initially finished second in Ukraine’s national selection competition, but they were elevated after it emerged the winner had previously traveled to Russian-annexed Crimea.

They were unveiled as the country’s entry on February 22, two days before Russian troops invaded Ukraine.

“All members of the group are somehow involved in the country’s defense,” Psyuk told CNN via email.

A member of the team’s media team joined the territorial defense and is fighting on the front line, leaving the group shorthanded in Turin. Psyuk volunteers to find internally displaced Ukrainians shelter and organize the transportation of food and medicines.

The backdrop of conflict complicated preparations for Eurovision. The group was forced to rehearse virtually until they were finally able to meet in Lviv after weeks of the war.

And their song has taken on new meaning. “Stefania,” sung in Ukrainian, is a tribute to Psyuk’s mother, who still lives in the western city of Kalush from which the band takes its name.

“On some days there are rockets flying over people’s houses and it is like a lottery – no one knows where it will hit,” Psyuk told CNN.

Organizers banned Russia from the contest in February, 24 hours after an initial, widely criticized decision to allow it to take part. The European Broadcasting Union concluded that the country’s presence “would bring the competition into disrepute.”

Belarus, which aided Moscow’s invasion, had already been suspended due to the suppression of media freedom in the country.

Kalush, meanwhile, sailed through Tuesday’s semifinal and elicited wild cheers from the crowd when they came on stage.

Eurovision is notoriously difficult to predict, given its point system relies both on jury verdicts and public voting from dozens of countries, but Kalush seems a safe bet to take this year’s crown.

A Ukrainian victory would mean the country had the right to host next year’s contest — but it is far from certain that such an event would be possible in Ukraine next May.

Psyuk, though, is optimistic. “We believe in our song … it has become a song about the motherland,” he said. “If it turns out that we will win, Eurovision 2023 will be held in Ukraine. In a new, integral Ukraine … a rebuilt, prosperous, happy country.”