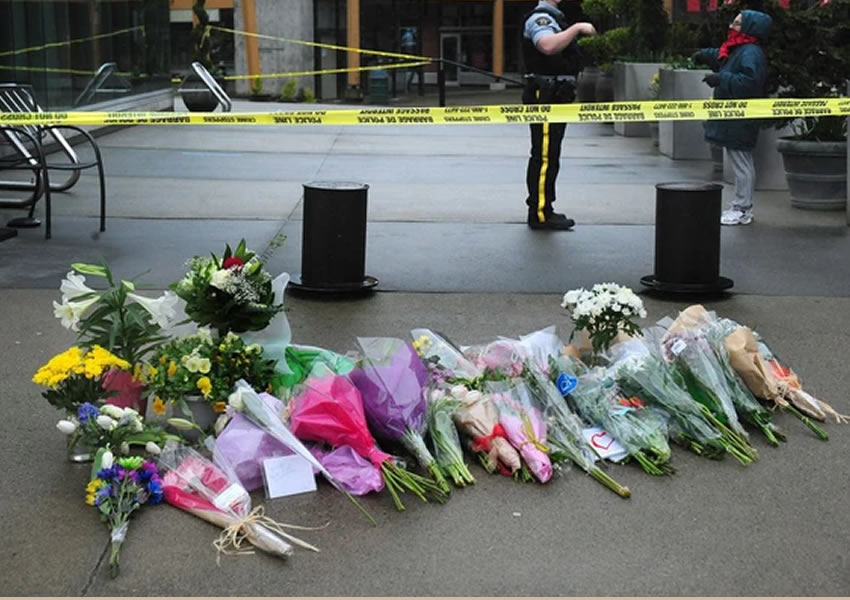 Yannick Bandaogo, 28, has been charged with second-degree murder in connection with the attack that left one woman dead and six people injured.

A 28-year-old man is facing a murder charge in connection with Saturday’s mass stabbing at the Lynn Valley Library in North Vancouver that left a woman dead and six other people injured.

North Vancouver RCMP said, “multiple victims” were attacked both inside and outside the library. A man was arrested at the scene and RCMP said there is no ongoing threat to the public.

Yannick Bandaogo was charged Sunday with second-degree murder in connection with the stabbing spree.

Sgt. Frank Jang, the spokesperson for IHIT, confirmed a woman in her late 20s died of her injuries while the remaining victims were treated in hospital for “non-life-threatening” injuries.

The North Vancouver District Public Library said none of their staff or volunteers was injured in the attack.

“Obviously the question is why did this happen, I understand. We believe we know the how, the what, the where and the when. It is our job now to determine why,” Jang told a news conference near the library. “That is going to be the No. 1 question for us.”

Jang said the man arrested Saturday has had previous interactions with police and has a criminal record. The motive for the stabbing spree is unknown.

According to court records, however, Bandaogo does not have a criminal record in British Columbia.

A man sharing his name appeared in a 2012 short film on YouTube titled Determination that depicts a young man training at the Techno-Boxe boxing club in Longueuil, Quebec.

IHIT said in a release on Sunday that Bandaogo’s background, history in B.C., and his relationship to the victims, if any, were still being determined.

On Sunday morning, a steady stream of people placed flowers at a makeshift memorial set up in a taped off area between the library and the Browns Socialhouse restaurant.

A sign above the memorial read “Lynn Valley Strong.”

“What we are seeing here today is a huge outpouring of support from the community, people are dropping off flowers (and) expressing appreciation to the emergency personnel who were here … it’s a way to express their grief in this situation,” said District of North Vancouver Mayor Mike Little. “I think that’s going to continue for some time and then we will have to work through the process of welcoming the community back to this space, which is a community civic place where we want people to feel safe and welcome.”

Both the library and the restaurant, along with all the shops in the Lynn Valley Village plaza, remained closed on Sunday.

Little says stories of heroism will begin to emerge over the next couple of days.

Darren Hailes said he had just finished a run with some friends and they were standing on a patio just outside the Lynn Valley library, unaware of the attacks that would leave one woman dead and six people injured.

“We weren’t immediately aware of the violence that had just taken place because the area was so calm,” he recounted in an interview on Sunday.

Then, he said, someone approached and asked Hailes if he had first aid training to help multiple people injured inside the library lobby. He did.

“I saw people running and out of the cafe bringing tea towels and various supplies to help with some of the bleedings. Somebody (had) obviously gone and got the first aid kit.”

Hailes estimates he arrived about a minute after the attacker left the lobby.

“The passage of time is quite blurry in my mind, but it didn’t feel very long before I first saw a fire engine pull up in front of the library and police arrived and paramedics arrived,” he said. “They immediately, of course, went to triage all of the different victims.”

Hailes said he later talked to a man who tried to lure the attacker away from other people around the library.

“Realizing he wasn’t going to be able to intervene and stop a man with a knife on his own, he immediately began to back away and to call the attacker toward him.”

The man backed through the library lobby and down the street and he was there when police arrested the suspect, Hailes said.

Video captured by Sam Garrett and published on Twitter showed multiple officers restraining a man on the ground after he appeared to cut himself before collapsing.

Ethan Jackson works at a dental office near the library and said he heard a woman scream and when he later looked out the window he saw a man lying on the ground covering his face.

Jackson said there was blood around the man and he was being treated by paramedics.

Prime Minister Justin Trudeau offered condolences to the victims in a tweet later on Saturday.

“My heart is in North Vancouver tonight. To everyone affected by this violent incident in Lynn Valley, know that all Canadians are keeping you in our thoughts and wishing a speedy recovery to the injured.”

Jonathan Wilkinson, the MP for North Vancouver and minister of environment and climate change, said he was “shaken” by the attack, and expressed how important the Lynn Valley Public Library is to the community.

“This library has been a secure place for families to gather in the Lynn Valley community for years,” he said in a statement. “Until today, it was unimaginable that such a senseless act of violence could have occurred in the very heart of it.”

Amy Robertson of B.C. Emergency Health Services said first responders transported the patients to the hospital after receiving a call at 1:46 p.m. on Saturday.

She said 11 ambulances and two supervising vehicles were deployed to the scene. Robertson wasn’t able to release details on the condition of the patients.

Local residents lay flowers at the scene of a mass stabbing that left one person dead at the Lynn Valley Library in North Vancouver, on March 28, 2021. Photo by NICK PROCAYLO /PNG

The attack wreaked havoc on a busy shopping area of North Vancouver early Saturday afternoon, where Jang said families had flocked to enjoy the last weekend before the end of spring break.

Steve Mossop and his partner stopped when they saw a woman who was covered in blood while they were driving on Lynn Valley Road next to the library. He said they thought she’d been in a car accident, but she told them she’d just been stabbed by a man.

Mossop said they saw several victims within about 100 metres of each other.

“It seemed like he was just running in a direction, whoever was in his path happened to be victimized,” he said.

Jang said IHIT investigators are asking for any video footage taken by witnesses at the scene, and are urging those who filmed the violence and the victims not to upload anything to social media but to provide it to the police instead.

“Everything little thing is important on this one. If you heard anything, if you were here and you saw the man that was taken into custody, if you heard him saying anything or whatever the case may be, we need you to come forward,” Jang said.