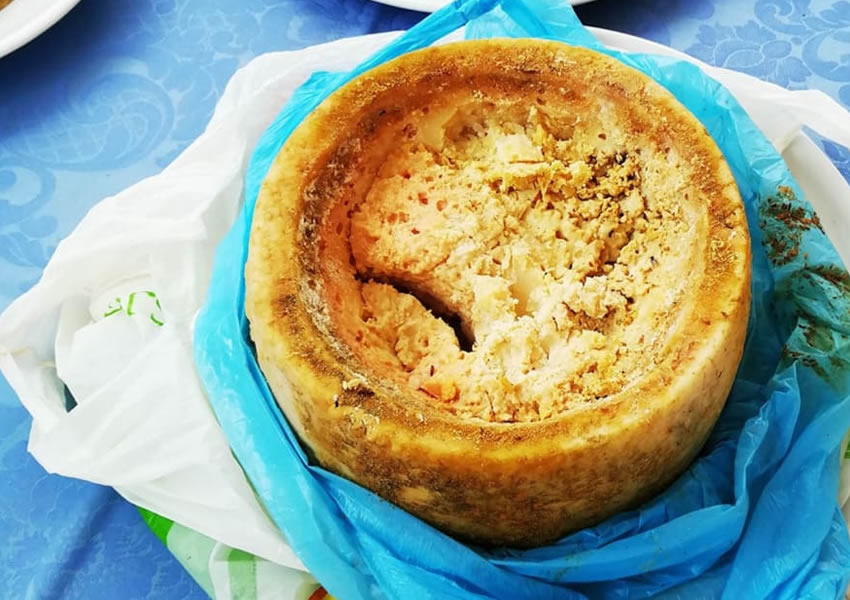 The Italian island of Sardinia sits in the middle of the Tyrrhenian Sea, gazing at Italy from a distance. Surrounded by a 1,849-kilometer coastline of white sandy beaches and emerald waters, the island’s inland landscape rapidly rises to form hills and impervious mountains.

And it is within these edgy curves that shepherds produce casu marzu, a maggot-infested cheese that, in 2009, the Guinness World Record proclaimed the world’s most dangerous cheese.

Cheese skipper flies, Piophila casei, lay their eggs in cracks that form in cheese, usually fiore sardo, the island’s salty pecorino.
Maggots hatch, making their way through the paste, digesting proteins in the process, and transforming the product into a soft creamy cheese.

Then the cheesemonger cracks open the top — which is almost untouched by maggots — to scoop out a spoonful of the creamy delicacy.
It’s not a moment for the faint-hearted. At this point, the grubs inside begin to writhe frantically.

Some locals spin the cheese through a centrifuge to merge the maggots with the cheese. Others like it au naturel. They open their mouths and eat everything.

Casu marzu is made with sheeps’ milk

If you are able to overcome the understandable disgust, marzu has a flavor that is intense with reminders of the Mediterranean pastures and spicy with an aftertaste that stays for hours.

Some say it’s an aphrodisiac. Others say that it could be dangerous for human health as maggots could survive the bite and and create myiasis, micro-perforations in the intestine, but so far, no such case has been linked to casu marzu.

The cheese is banned from commercial sale, but Sardinians have been eating it, jumping grubs included, for centuries.
“The maggot infestation is the spell and delight of this cheese,” says Paolo Solinas, a 29-year-old Sardinian gastronome.

He says some Sardinians cringe at the thought of casu marzu, but others raised on a lifetime of salty pecorino unabashedly love its strong flavors.

“Some shepherds see the cheese as a unique personal pleasure, something that just a few elects can try,” Solinas adds.

Yet, if you are adventurous enough, it’s possible to find the casu marzu. It shouldn’t be seen as a weird attraction, but a product that keeps alive an ancient tradition and hints at what the future of food might look like.

Giovanni Fancello, a 77-year-old Sardinian journalist and gastronome, spent his life researching local food history. He’s traced it back to a time when Sardinia was a province of the Roman empire.

“Latin was our language, and it’s in our dialect that we find traces of our archaic cuisine,” Fancello says.

There is no written record of Sardinian recipes until 1909, according to Fancello. That’s when Vittorio Agnetti, a doctor from mainland Modena, traveled to Sardinia and compiled six recipes in a book called “La nuova cucina delle specialità regionali.”

“But we have always eaten worms,” says Fancello. “Pliny the Elder and Aristotle talked about it.”

Ten other Italian regions have their variant of maggot-infested cheese, but while the products elsewhere are regarded as one-offs, casu marzu is intrinsically part of Sardinian food culture.

The cheese has several different names, such as casu becciu, casu fattittu, hasu muhidu, formaggio marcio. Each sub-region of the island has its own way of producing it using different kinds of milk.

Foodies inspired by the exploits of chefs such as Gordon Ramsay often come in search of the cheese, says Fancello. “They ask us: ‘How do you make casu marzu?’ It’s part of our history. We are the sons of this food. It’s the result of chance, of magic and supernatural events.”

Fancello grew up in the town of Thiesi with his father Sebastiano, who was a shepherd who made casu marzu. Facello shepherded his family’s sheep to grazing grounds around rural Monte Ruju, lost in the clouds, where magic was believed to happen.

He recalls that, for his father, casu marzu was a divine gift. If his cheeses didn’t become infested with maggots, he would be desperate.

Some of the cheese he produced stayed for the family, others went to friends or people who asked for it.

Casu Marzu is typically produced at the end of June when local sheep milk begins to change as the animals enter their reproductive time and the grass dries from the summer heat.

If a warm sirocco wind blows on the cheesemaking day, the cheese-transforming magic works even harder. Fancello says it’s because the cheese has a weaker structure, making the fly’s job easier.

After three months, the delicacy is ready.

“You know when a form will become casu marzu,” he says. “You see it from the unusual spongy texture of the paste,” Murrocu says.
Nowadays, this isn’t so much down to luck as the ideal conditions that cheesemongers now use to ensure as many casu marzu as possible. They’ve also figured out a way to use glass jars to conserve the cheese, which traditionally never lasted beyond September, for years.

Though revered, the cheese’s legal status is a gray area.

Casu marzu is registered as a traditional product of Sardinia and therefore is locally protected. Still, it has been deemed illegal by the Italian government since 1962 due to laws that prohibit the consumption of food infected by parasites.

Those who sell the cheese can face high fines up to €50,000 (about $60,000) but Sardinians laugh when asked about the prohibition of their beloved cheese.

In the past few years, the European Union has begun to study and revive the notion of eating grubs thanks to the concept of novel food, where insects are raised to be consumed.

Roberto Flore, the Sardinian head of Skylab FoodLab, the food system change laboratory of the Technical University of Denmark’s innovation hub, has long studied the concept of insect consumption.

For a few years, he led the Nordic Food Lab research and development team — part of the three-Michelin-starred NOMA restaurant — trying to figure out ways to insert insects into our diet. 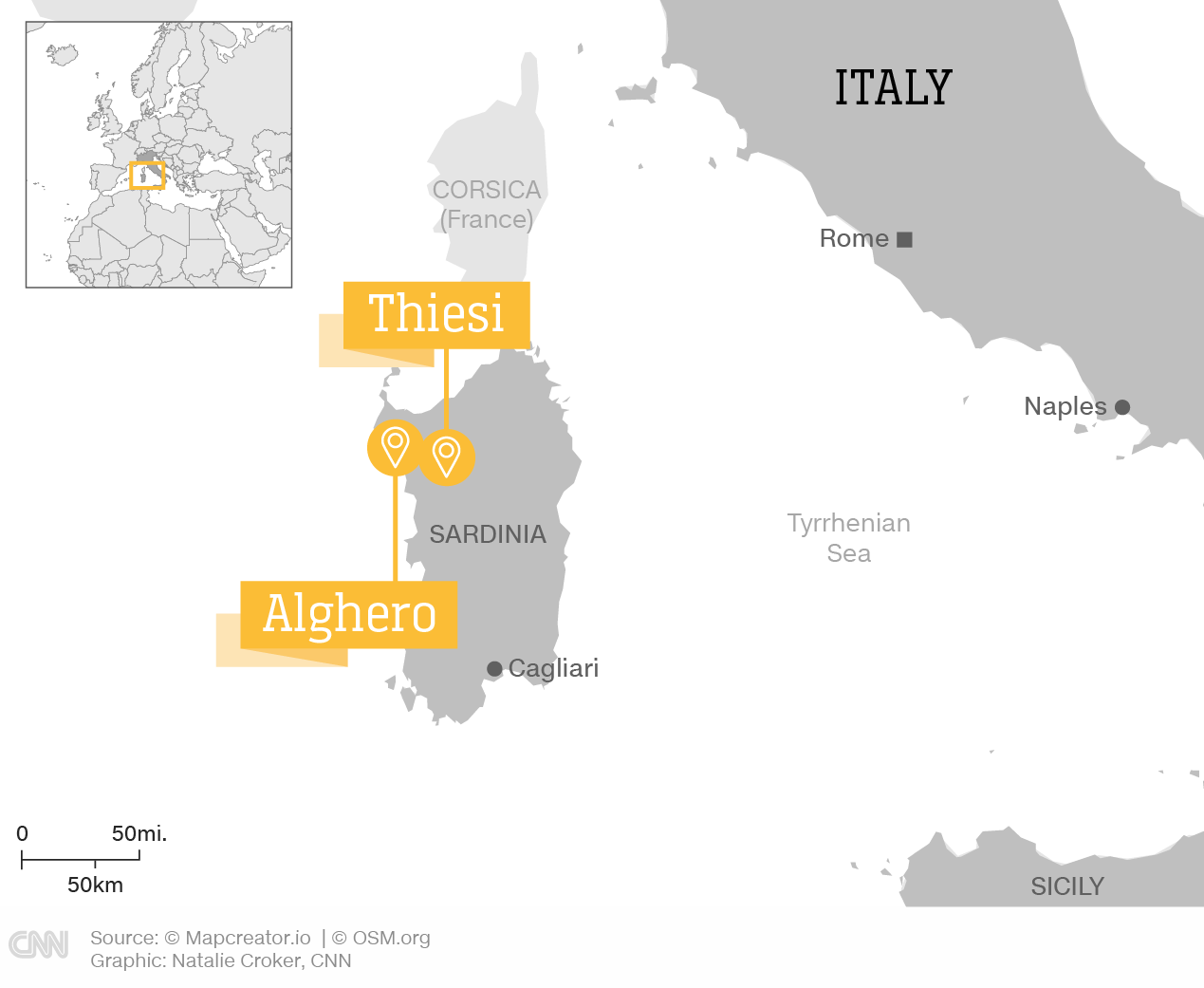 “Lots of cultures associate the insect with an ingredient,” Flore says. That said, Sardinians prefer the cheese to the maggot and are often horrified by the idea that people eat scorpions or crickets in Thailand.

Flore says he’s traveled around the world to study how different cultures approach insects as food and believes that while psychological barriers make it difficult to radically alter eating habits, such consumption is widespread.

“How do you define edible food?” he says .”Every region of the world has a different way to eat insects.”

He’s convinced that Sardinia’s delicacy is safe to eat.

“I believe that nobody has ever died eating casu marzu. If they did, maybe they were drunk. You know, when you eat it, you also drink lots of wine.”

Flore hopes casu marzu will soon shed its clandestine status and become a symbol of Sardinia — not because of its unusual production, but because it’s emblematic of other foods now vanishing because they don’t fit in with modern mainstream tastes.

In 2005, researchers from Sardinia’s Sassari University made the first step in this direction: they raised flies in the lab and made them infect pecorino cheese to show that the process can happen in a controlled way.

Islanders and researchers hope that the European Union will soon rule in their favor.

Until then, anyone who wants to sample it will need to ask around when they get to Sardinia.

For those willing to suspend concerns about what they’re eating, it offers an authentic experience recalling a time when nothing was thrown away and when boundaries of what was edible or not were less well defined.

Cheesemonger Murrocu says that, fittingly, locals keep an open mind about the best way to eat casu marzu, but a few other regional treats have been known to help it slip down easier.

“We spread the cheese on wet pane carasau, and we eat it,” he says. “But you can eat it as you want, as long as there is some formaggio marcio and a good cannonau wine.”