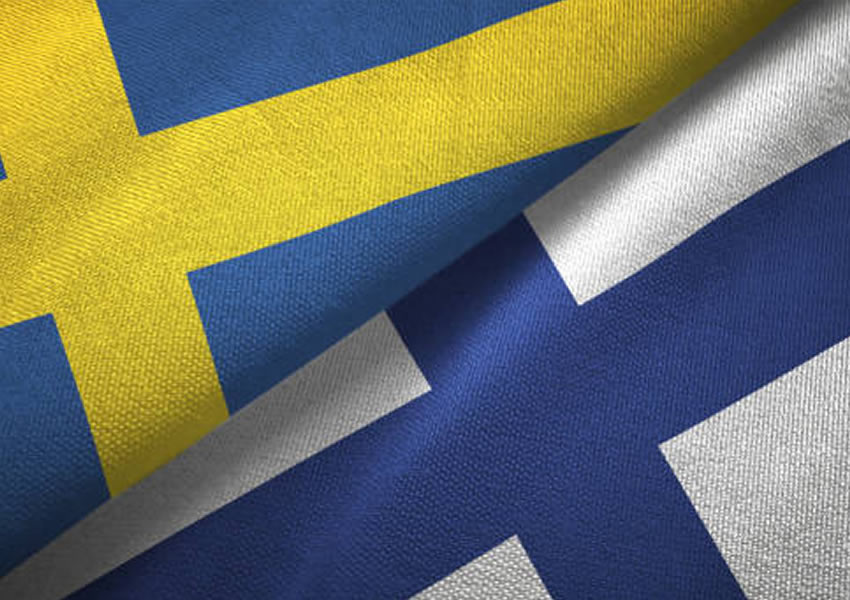 Finland is on the cusp of joining NATO while Sweden is on the verge of following suit. Here’s what you need to know about how the war in Ukraine pushed the two Nordic states closer to the US-backed alliance, and what comes next.

While other Nordic countries like Norway, Denmark, and Iceland were original members of the alliance, Sweden and Finland did not join the pact for historic and geopolitical reasons.

Both Finland, which declared independence from Russia in 1917 after the Bolshevik revolution, and Sweden adopted neutral foreign policy stances during the Cold War, refusing to align with the Soviet Union or the United States.

For Finland, this proved more difficult, as it shared a massive border with an authoritarian superpower. To keep the peace, Finns adopted a process some call “Finlandization,” in which leaders acceded to Soviet demands from time to time.

Both countries’ balancing acts effectively ended with the collapse of the Soviet Union. They joined the European Union together in 1995 and gradually aligned their defense policies with the West, while still avoiding joining NATO outright.

Each country had different reasons for avoiding signing up for the NATO pact in tandem with the EU.


For Finland, it was more geopolitical. The threat to Russia is more tangible thanks to the two countries’ shared 830-mile border.

While an independent nation, Sweden’s geography puts it in the same “strategic environment” as its liberal democratic neighbors, Bildt said. Finland and Sweden have enjoyed a close partnership for decades, with Stockholm viewing its decision to refrain from joining NATO as a way to help keep the heat off Helsinki. Now, however, Sweden is likely to follow Finland’s lead.

“We share the idea that close cooperation will benefit both of us,” current Swedish Prime Minister Magdalena Andersson said at a news conference last month alongside her Finnish counterpart, Sanna Marin.

What does NATO membership entail?

The reason most countries join NATO is because of Article 5 of the North Atlantic Treaty, which stipulates that all signatories consider an attack on one an attack against all.

Article 5 has been a cornerstone of the alliance since NATO was founded in 1949 as a counterweight to the Soviet Union.
The point of the treaty, and Article 5 specifically, was to deter the Soviets from attacking liberal democracies that lacked military strength.

Article 5 guarantees that the resources of the whole alliance — including the massive US military – can be used to protect any single member nation, such as smaller countries that would be defenseless without their allies. Iceland, for example, has no standing army.

Bildt said he doesn’t see new big military bases being built in either country should they join NATO. He said that joining the alliance would likely mean more joint military training and planning between Finland, Sweden, and NATO’s 30 current members.

Swedish and Finnish forces could also participate in other NATO operations around the globe, such as those in the Baltic states, where several bases have multinational troops.

“There’s going to be preparations for contingencies as part of deterring any adventures that the Russians might be thinking of,” Bildt said. “The actual change is going to be fairly limited.”

Why does Russia loathe NATO?

Russian President Vladimir Putin sees the alliance as a bulwark aimed at Russia, despite the fact that it had spent much of the post-Soviet years focusing on issues like terrorism and peacekeeping.

Before Putin invaded Ukraine, he made clear his belief that NATO had edged too close to Russia and should be stripped back to its borders of the 1990s, before some countries that either neighbor Russia or were ex-Soviet states joined the military alliance.

Ukraine’s desire to join NATO, and its status as a NATO partner — seen as a step to eventual full membership — was one of the numerous grievances Putin cited in an attempt to justify his country’s invasion of its neighbor.

The irony is that the war in Ukraine has, effectively, given NATO a new purpose.

“Article 5 is back in the game, and people understand that we need NATO because of a potential Russian threat,” Stubb said in an interview with CNN before the invasion.

Why the war in Ukraine changed everything

Russia’s invasion of Ukraine was the final straw that pushed Sweden and Finland to pull the trigger on NATO membership.

If the Kremlin was willing to invade Ukraine, a country with 44 million people, a GDP of about $516 million, and an armed force of 200,000 active troops, what would stop Putin from invading smaller countries like Finland in Sweden?

Since the Russian invasion of Ukraine in February, public support for joining NATO in Finland has leaped from around 30% to nearly 80% in some polls. The majority of Swedes also approve of their country joining the alliance, according to opinion polls there.

“Our NATO membership was decided on the 24th of February, at 5 o’clock in the morning, when Putin and Russia attacked Ukraine,” Stubb said. “Finland and Sweden would not have joined without this attack.”

Officials in both Sweden and Finland have also expressed frustration that, in the lead-up to the war in Ukraine, Russia attempted to demand security guarantees from NATO that the alliance stop expanding eastward.

Such a concession, however, would have effectively given Russia the power to dictate the foreign policies of its neighbors by taking away their ability to choose their own allies and partners.

Russia, Swedish Defense Minister Peter Hultqvist told CNN, wants “real influence in the security choices in Europe.”
“They want an influence over the countries in the neighborhood. And that is totally unacceptable for Sweden.”

Finnish leaders announced their intentions to join NATO on Thursday. Sweden is expected to follow suit, potentially as early as Monday, according to Bildt.

Finland said that it hopes to apply for membership “without delay,” and complete the steps it needs to on the national level “in the next couple of days.” That will include a vote in the Finnish parliament, which ultimately votes on the decision of whether to join.

NATO diplomats told Reuters that ratification of new members could take a year, as the legislatures of all 30 current members must approve new applicants.

Both countries already meet many of the criteria for membership, which include having a functioning democratic political system based on a market economy; treating minority populations fairly; committing to resolving conflicts peacefully; the ability and willingness to make a military contribution to NATO operations; and committing to democratic civil-military relations and institutions.

As two thriving liberal democracies, Sweden and Finland fulfill the requirements for entry to NATO – although Turkey, for one, could make the process more difficult for the aspiring members.

That country’s President Recep Tayyip Erdogan said Friday he was not looking at both countries joining NATO “positively,” accusing them of housing Kurdish “terrorist organizations.”

In the meantime, both countries will have to rely on their current allies and partners for security guarantees, rather than Article 5. Sweden and Finland have received assurances of support from the United States and Germany should they come under attack, while British Prime Minister Boris Johnson signed mutual security agreements with his Finnish and Swedish counterparts this week.

How has Russia reacted?

Russia lambasted the decision. Its Foreign Ministry said in a statement that Finland had adopted a “radical change” in foreign policy that will force Russia to take “retaliatory steps, both of a military-technical and other nature.”

Kremlin spokesperson Dmitry Peskov said that “NATO expansion does not make the world more stable and secure.” He added that Russia’s reaction would depend on “how far and how close to our borders the military infrastructure will move.”

Russia currently shares about 755 miles of land border with five NATO members, according to the alliance. Finland’s accession would mean that a nation with which Russia shares an 830-mile border would become formally militarily aligned with the United States.

Not only would this be bad news for the Kremlin, but the addition of Finland and Sweden would benefit the alliance. Both are military severe powers, despite their small populations.

However, Bildt and Stubb, the former Swedish and Finnish premiers, believe that so far, Russia’s response has been relatively muted.
“The Kremlin sees Finnish and Swedish NATO membership as a Nordic solution, and in that sense, not a radical threat,” said Stubb. “We’re not too worried.”

Stubb and Bildt said they believe Moscow ultimately sees the two countries as reliable neighbors, despite their decision to join a Washington-backed alliance.

“The fact that Finland and Sweden are part of the West doesn’t come as a surprise,” said Bildt.