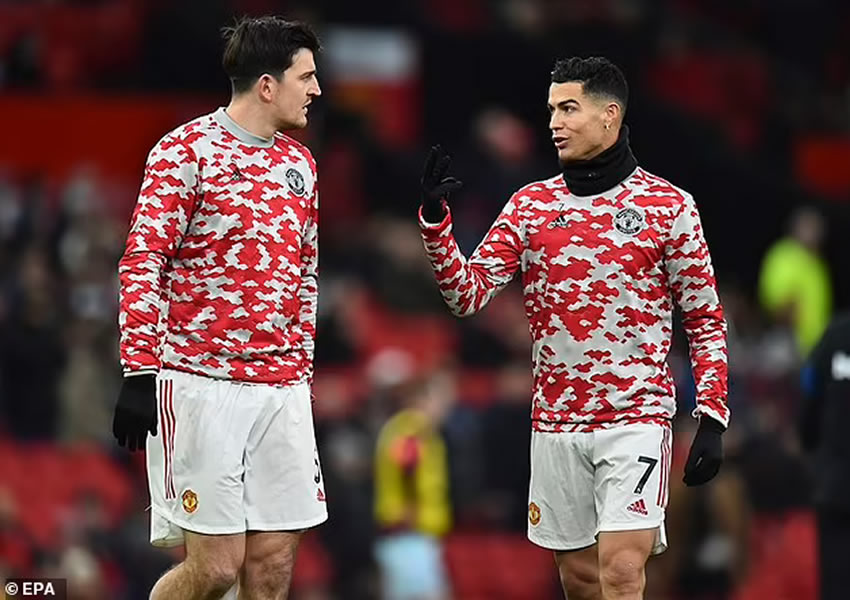 Cristiano Ronaldo and Harry Maguire are reportedly locked in a power struggle over the Manchester United captaincy at the moment.

The United pair have, according to a report in The Mirror, been in conversation with interim boss Ralf Rangnick about a change of skipper for the rest of this season.

While the idea behind 37-year-old Ronaldo taking the armband is to take pressure off Maguire, the England international is reluctant to agree as he doesn’t want to lose the captaincy permanently.

The report details that there is now a growing belief in the dressing room that Ronaldo will take over as captain, while Maguire struggles for form at center back.

A source explained: ‘Originally, Ronaldo was asking players to back Harry. But the problem is the manager now wants Ronaldo to mentor all these younger players.

‘That’s left Harry in no man’s land, as he’s the captain and having to say and follow whatever Ronaldo says, to keep everything sweet.’

Ronaldo has been mentoring the younger players – as per Rangnick’s instructions – since the German arrived in November.

Maguire, on the other hand, is said to feel ‘marginalized’ by Ronaldo’s role in the dressing room.

Ronaldo has, publicly, supported Maguire but that vocal backing is said to have lessened in recent weeks.

Earlier this week, Marcus Rashford rubbished claims of disharmony within Man Utd’s squad, insisting that they are all pushing in the same direction.

Yet other attempts from elsewhere in the dressing room have reportedly been made to undermine Rangnick and his coaching staff.

Last week it was claimed that some United players refer to Rangnick’s No 2, Chris Armas, as Ted Lasso – the hapless coach in an Apple+ TV series.

Spanish outlet AS also claims that five-time Ballon d’Or winner Ronaldo believes Rangnick does not have the ability to manage United and is out of his depth at Old Trafford.

Although Rangnick gushed over Ronaldo’s  ‘amazing’ contribution against Brighton on Tuesday and said it was the 37-year-old’s best performance in weeks as United returned to winning ways.

‘I think overall it was a good performance by Cristiano.

‘Energetically, he was on there, he was always trying to help the team-mates so I think in the last weeks definitely the best performance by him and a very, very important goal for us.’